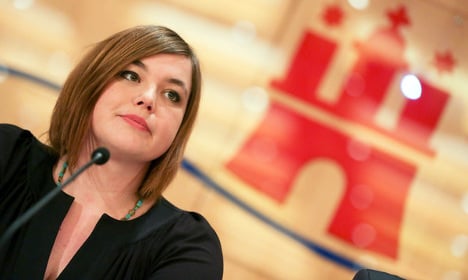 The 39-year-old politician said she was molested twice by the same man at a giant party held at Hamburg's representative building in the German capital on Tuesday night, German media reported.

Most of the more than 3,000 guests had already left when an inebriated man groped her once on the dance floor and then again as she walked away, she told police.

The Hamburg Green party politician said she called for security staff, who apprehended the man before handing the suspect over to the police.

Police confirmed that a man had been arrested at the party and added that a second woman had also filed a sexual molestation complaint.

They identified the suspect as a 24-year-old Pole from the city of Wroclaw. It is not known if he was an invited guest or a gatecrasher.

“It's possible that he was from one of the companies that prepared the event,” said Steffen Hebestreit, the head of Hamburg's representation in Berlin.

The suspect scuffled with police before being led away.

He was later released from police custody but remains under suspicion for allegedly groping the women and for resisting arrest.

Speaking to the Bild newspaper, Fegebank said: “This was a very unpleasant experience for me. Unfortunately it came at the end of a really nice evening.”

Fegebank in 2008 became the youngest ever head of a Green party state association when she took the reins in Hamburg.

She is also Senator for Science, Research, and Equal Rights in the Hamburg government.