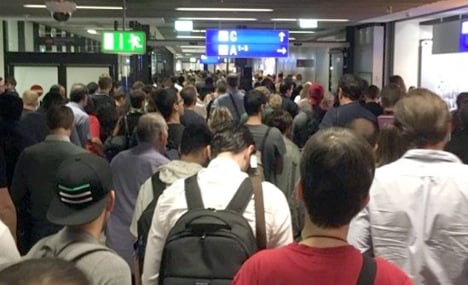 Travelers being evacuated from Terminal 1 of Frankfurt airport. Photo: DPA.

Officials had partially evacuated the airport on Wednesday morning before police found and arrested a woman who had somehow evaded proper checks, prompting security concerns.

A spokeswoman from airport operator Fraport said later in the afternoon that around 100 flights were cancelled due to the security concern. Although operations had resumed as normal by around noon, the airport still expected there to be some delays for travellers into the evening.

A spokeswoman for airline Lufthansa said that the company had offered passengers on domestic flights the chance to instead reach their destinations by trains with Deutsche Bahn. Officials though could not say how many travellers had been affected by the cancellations and delays.

Passengers were allowed back into Terminal 1 of Frankfurt Airport on Wednesday afternoon at around 12.20 pm, after the terminal was partially evacuated earlier in the day, Hessischer Rundfunk (HR) reports.

Police tweeted that the evacuation of the area was over, that there was no danger, and that people could check in again.

A woman was ultimately identified and arrested, after she was suspected of passing through security without going through the proper checks.

Fraport tweeted earlier on Wednesday that Terminal 1 had been partially evacuated as a precautionary measure.

The company explained that passengers would need to be checked again before they departed.

Today at Frankfurt Airport a passenger entered the security area before the security check had been completed. 1/1

Therefore the German federal police cleared departure hall A as a preventative measure.Passengers will be rechecked prior to departure.2/2

Airport police said on Twitter that there was no bomb threat after some media organisations had reported this detail.

The airport did at one point bring in a special vehicle for bomb disposal to inspect an abandoned piece of luggage, but officials said this was unrelated to the security alert.

The airport said that all travelers should “allow extra time to reach the airport”. The company also advised checking flight statuses ahead of time, by clicking this link.

Due to current police action at FRA, passengers are advised to allow extra
time to reach the airport. Details: https://t.co/vjKIM3wiSp

Witnesses at the airport told DPA that passengers had been sent out of the building, and that the atmosphere during the evacuation was calm.

Travellers posted pictures and videos on social media of the airport terminal being evacuated.

German airports including Frankfurt's have been on high alert since terror attacks in Europe, especially after the Brussels airport and metro bombings in March.

Shortly before the Brussels attacks, German police arrested a suspected jihadist at Frankfurt airport over allegations he had joined Isis and appeared in propaganda videos for the group.

Frankfurt airport is of particular security concern because it is a major international transfer hub and Germany's busiest airport for passenger traffic.

It was also the site of an Islamist-motivated shooting in 2011, when an airport post office worker shot and killed two US airmen and wounded two others.