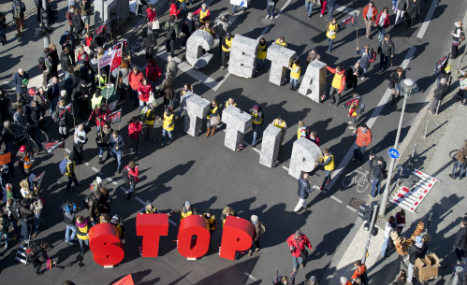 “The talks with the US have de facto failed because we Europeans of course must not succumb to American demands,” he told public broadcaster ZDF.

“Nothing is moving forward.”

Negotiators from the US and the EU are in talks to finalize the proposed Transatlantic Trade and Investment Partnership (TTIP) which would create the world's largest free trade area.

But the European Commission on Monday insisted that talks on the trade deal were on track.

“Talks are now indeed entering a crucial stage but … provided the conditions are right, the Commission stands ready to close this deal by the end of the year,” Schinas told a regular press briefing.

The EU and US began work on TTIP in 2013, aiming to create the world's largest free trade area by the time President Barack Obama leaves office in January next year.

But the negotiations have been bogged down over the terms of the agreement as well as Britain's shock vote to leave the EU and rising opposition to the deal in France and Germany.

The setbacks have raised serious doubts that it will be achieved by the end of the year as hoped.

Activists who have opposed TTIP since negotiations began in 2013 say the deal would only benefit multinationals and harm consumers.

France's Prime Minister Manuel Valls has said it would be “impossible” for the two sides to conclude negotiations on a trade deal by the end of 2016.

Behind the scenes, top diplomats have told AFP talks may be suspended until after the US presidential election in November as well as elections in France and Germany next year.

In the interview on Sunday, Gabriel was more upbeat about a Canada-EU free trade agreement, which he called “a big step forward”, adding he would fight for its ratification.

The deal known as CETA was formally concluded in 2014 and requires the approval of 28 EU member states and European Parliament.