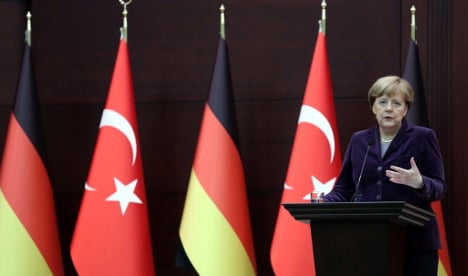 Chancellor Angela Merkel told Ruhr Nachrichten newspaper on Tuesday that people with Turkish roots living in Germany should be loyal to the country.

“We expect that people of Turkish origin who have been living in Germany for a long time should develop a high level of loyalty to our nation,” Merkel said.

“Therefore we are trying to have open ears to hear their concerns and to understand them. And for this we are also keeping in close contact with immigrant associations.”

Merkel’s talk of loyalty comes as the government is considering new measures to combat terrorism, including getting rid of dual citizenship. Members of Merkel’s conservative Christian Democratic Union party (CDU) have said that dual nationality poses a “huge obstacle to integration”.

The Chancellor also commented on the current situation in Turkey where President Recep Tayyip Erdogan has been cracking down on suspected dissenters in the wake of a failed coup last month. She urged Germany’s Turkish community to remain calm despite the circumstances dividing the country.

“Freedom of opinion and to demonstrate are meant for everyone who lives here in Germany, but of course everyone must peacefully express their differences of opinion,” Merkel said.

Erdogan and his supporters in Germany criticized German authorities when officials denied the Turkish president the chance to speak via video link to a rally of tens of thousands in Cologne at the end of last month.