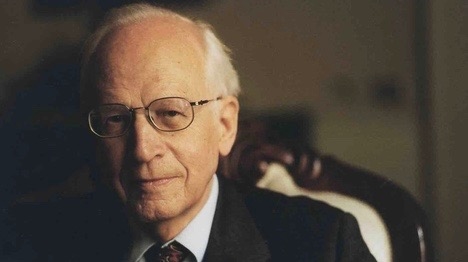 In 1986, Nolte, an author of respected academic work on fascism, published an essay entitled “The Past That Won't Go Away”, suggesting that a direct causal link could have existed between the Soviet  “class massacre” and the “social massacre” later committed by the Nazis.

In the article the historian provocatively asked “didn’t the Gulag archipelago happen prior to Auschwitz?”

Nolte, who died this week at the age of 93, suggested that Stalin's forced-labour camps and the killing of millions of peasants in the Soviet Union were forerunners of the Nazi crimes.

One of the concerns that arose following Nolte’s hypothesis, was the potential threat of minimizing Nazi crimes.  His thesis was mostly refuted by the historical community, and he was was heavily criticized by sociologist and philosopher Jürgen Habermas, who accused Nolte of trying to whitewash the past in a column for  “Die Zeit”.

The controversy was not only intellectual but also thoroughly political. Right-wing intellectuals argued that a similar approach should be taken towards different totalitarian states, whereas left-wing intellectuals thought that the Nazi crimes could not be equated with the crimes of the Soviet communism.

Despite criticism, Nolte did not alter his point of view. Refuting the reproach made to him that he had turned into a right-wing revisionist, he argued that it was actually public opinion that had shifted to the left.

But he found himself ever more isolated in the academic community and in public opinion. In 2000 Angela Merkel, then head of the CDU, rejected the offer to hold a speech in his honour when he was awarded a prestigious academic award.

The debate not only create a more complex argument though, since then other historians have tried to propose more comprehensive arguments to the question of the Holocaust and its causes.

Nolte later said he was not embittered by the isolated position he found himself in.

In an interview with Die Welt in 2006 he said he saw himself as a historical thinker rather than a historian. “That's the way I want to be seen and when all my work is considered in its entirety I believe that description will be justified.”