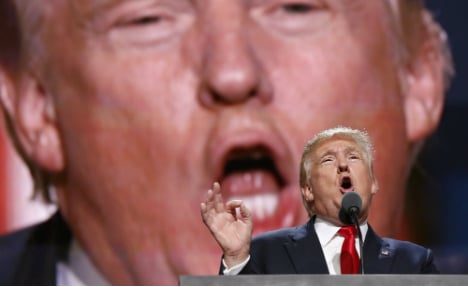 Discussing his Democrat rival's health care, education and plans, which he claimed would create a “lifetime cost of $400 billion”, Trump concluded that “in short Hillary Clinton wants to be America’s Angela Merkel.”

After lapping up the mixture of jeers and claps he continued on the completely unrelated topic of crime.

“You know what a disaster this massive immigration has been to Germany and the people of Germany. Crime has risen to levels that no one thought they would ever, ever see. It is a catastrophe.”

To listen to Trump you would think that Merkel spends most of her free time handing out 100 euro bills to refugees on the street while all around her foreigners are robbing banks and plundering the homes of honest, hard-working Germans.

It was interesting to see how the tycoon seamlessly jumped from social spending to immigration and crime – as if these things were one and the same. It told us a lot about how angry conservatives in the USA see Germany, but absolutely nothing about reality in the Federal Republic.

On closer analysis Trump's statements turn out – wait for it – to be complete fantasy.

If Trump had even the slightest idea about German politics he would know that Merkel has presided over a government that has an obsession with financial tight-fistedness.

Finance Minister Wolfgang Schäuble fastidiously sticks to the concept of schwarze Null, whereby the tax man takes in more than the government spends in a year.

Critics point to decaying road and rail infrastructure, and to increased levels of child poverty, in appealing to the government to loosen the purse strings and start investing in the country's future.

World Bank figures on government debt as a percentage of GDP shows that Germany is one of the class swots in the developed world, with public debt coming to 52.3 percent of GDP. As a comparison the USA's public debt is 96.8 percent of GDP and the OECD average is 68.3 percent.

And, to Merkel's credit, Germany manages this while providing free higher education, a national minimum wage and a health care system that ensures no one is left behind.

Trump's claim about unimaginable crime levels since the refugee influx of 2015 is even more risible.

German police figures for 2015 show that the crime rate rose during the year by 4.1 percent to slightly over 6.3 million registered crimes. This came out to just under 7,800 crimes per 100,000 residents.

But this increase was completely distorted by one statistic: that the huge numbers of refugee arrivals had created an explosion in the number of people illegally entering the country.

Crimes committed by migrants, such as sexual assaults in Cologne over New Year (around half of the suspects for which had arrived in Germany in the previous 12 months) and an axe attack on a train in Würzburg in July, have made international headlines. But these only represent a vanishing proportion of overall crime.

The fact is in 2015 Germans were safer than they have ever been since the reunification of the country.

If Trump cared, he could find these things out. But he doesn’t. He is only interested in whipping up racist fervour among white people in his own country – and Germany serves as a useful tool in this twisted game.