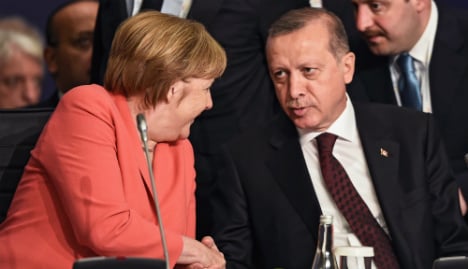 The leaked report states the German government’s belief that Ankara has been deliberately financing Islamist and terror organizations with the direct consent of President Recep Tayyip Erdogan, according to the report aired by ARD on Tuesday.

The document written by the Interior Ministry was a confidential answer to a question posed by Die Linke (the Left Party) in the German parliament (Bundestag).

“The numerous affirmations of solidarity and support for the Muslim Brotherhood in Egypt, for Hamas and for armed Islamist opposition groups in Syria by the ruling AKP party and president Erdogan underscore their ideological affinity to their Muslim brothers,” the document states, according to ARD.

The Muslim Brotherhood produced the first Egyptian president elected in free democratic elections after the resignation of aged dictator Hosni Mubarak in 2011. But president Mohammed Morsi was overthrown by the Egyptian military in June 2013.

The Muslim Brotherhood are not considered a terror organization by the EU or the United States.

Hamas are an Islamist militant group which controls the Gaza Strip, a section of Palestinian territory which lies between Israel and Egypt. They are considered a terror organization by the EU and the United States.

Ankara has repeatedly denied it delivers weapons to Islamist militants in Syria. But it has a very different attitude to Hamas as that of western states, viewing the group as a legitimate representative of the Palestinian people.

According to Spiegel this is the first time the German government has publicly accused Turkey of having links to Hamas and other Islamist militant groups.

The document also reportedly claims that Ankara has recently deepened its links with these groups.

“As a result of the step-by-step Islamization of its foreign and domestic policy since 2011, Turkey has become the central platform for action by Islamist groups in the Middle East,” the document states, according to ARD.

Relations between Germany and Turkey have soured markedly in recent months after the Bundestag ratified a proposal to recognize the massacres of Armenians by Turkish Ottoman troops in 1915-16 as genocide.

German authorities also recently barred Erdogan from talking via video link to supporters at a rally in Cologne where thousands took to the streets to support the Turkish president after a failed coup in July.

But it does not appear that the German government intended to use this classified document as a means of embarrassing Ankara.

The document stated that a public response to Die Linke's question was not possible “for the welfare of the state.”

It is also not clear to what extent the response had been agreed with the Foreign Ministry.

Foreign Minister Frank-Walter Steinmeier has been cautious in his criticism of Turkey ever since the EU signed a refugee deal with Turkey in March, which has contributed to massively reducing the number of asylum seekers arriving in Germany since a high point at the end of last year.

Germany has the largest Turkish diaspora in the world with roughly three million people of Turkish heritage living in the Bundesrepublik.