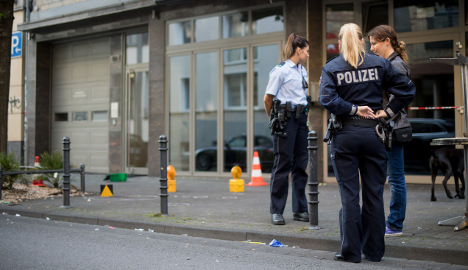 Police at the crime scene in Cologne. Photo: DPA.

Police reported that a 34-year-old man was seriously injured during a fight in the early hours of Monday morning within the centre of Cologne.

Witnesses alerted police to the situation shortly before 4am, saying that several people were involved in an altercation.

At the crime scene officers found shattered glass and bloodstains as well as spent bullet cases, though they said they are still investigating whether these were related.

Witnesses said several cars were seen fleeing the scene, and the injured man was found inside his white SUV with a stabbing wound as well as head injuries. He was then taken to hospital.

Officers later found several people inside a bar, who were then taken into custody for questioning. Two vehicles were also seized for the investigation.

Local newspaper Express and broadcaster WDR reported that shots had been fired during the altercation.

Police told DPA that they could not confirm reports of guns, an axe or a knife being used.

Express reported that witnesses saw three or four people arguing with another man, and that the men were all well-dressed.

Witnesses also told Express that the men had attacked one another using axes.

The man who appeared to be on his own, fighting the others, was wounded with a knife and tried to escape by running to his Mercedes. The other men then shot at him, but only hit his car.

Police said that the background of the fight is still unclear, but there is no evidence that it was a terrorist or rampage attack.