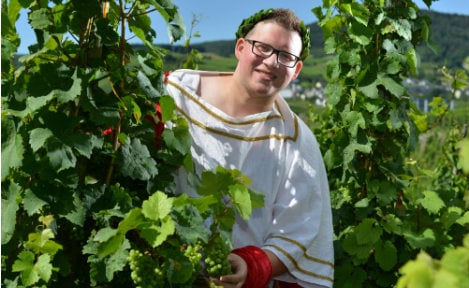 Bedecked in a white robe, a velvet shawl and a laurel wreath, Sven Finke doesn’t fit the stereotype of the traditional wine queen – a beautiful young girl wearing a dirndl.

But on August 12th, the 25-year-old law student and vineyard-owner will be the first ever man to be crowned wine queen for the town of Kesten in the state of Rhineland-Palatinate.

It wasn't his charming eyes or gleaming smile that won him the title though, it was rather to do with the fact that there weren’t exactly queues of women volunteering for the role. In fact, none did at all.

Michael Beer, the village mayor, explained that doing without an “Ambassador for Wine” would have been out of the question: The tiny town of Kesten only has a population of 350 people, but it is home to a massive 25 wine businesses and is reliant on the grape for its economic survival.

So Finke stepped up to the plate.“I want to show everyone that men are just as well suited to this job as women,” he announced.

As the wine king he will attend between 15 and 20 wine festivals in the village and beyond throughout the course of his reign.

Beer for one seems happy with the result. “Finke is contributing to making the wine village of Kesten more well-known,” he said.

Why does Germany choose wine queens?

Established in the 1930s, the tradition of selecting wine queens in southwestern Germany’s wine-growing regions involves choosing a winner who will represent the wine industry during the following year.

After the 13 regional winners are crowned, one of them is picked to become Germany’s national wine queen.

In its early years, the tradition was much like a beauty pageant, in which pretty German girls from families of wine-growers would compete to claim the title, bedecked in dirndls and dancing the waltz.

The traditional stereotype of a German wine queen; Photo: DPA.

But the rules have since been relaxed – dirndls are no longer a requirement, and women who defy the classic stereotype also recently have been crowned wine queens. In 2013, a transsexual lady won the title of wine queen for the Green Party, and earlier this year, a Syrian refugee won the title in the town of Trier.

This wacky tradition isn't the only one of its kind in Germany, though. The Bundesrepublik has a weird and wonderful selection of other queens, ranging from the queen of potatoes to the asparagus queen.

Eating, drinking, and “full of the joys of life”

After he is crowned, Finke plans to play the figure of Bacchus, the Roman god of agriculture, the grape harvest, wine, and rituals.

He chose Bacchus due to the town's Roman roots, as well as the fact that its favourite type of grapes is the Bacchus variety.

“The role of Bacchus is right up my street,” Finke exclaimed. “I like eating, I like drinking, and I am just as full of the joys of life.”

The wine king in his Bacchus costume; Photo: DPA.

It’s “an absolute rarity” for a man to be selected for the role, said Ernst Bücher, a spokesperson from the German Wine Institute.

“In the whole Mosel region [one of the 13 German wine-making regions] there are currently no other men in office”, Finke revealed.

So holding the title “will be a sign of equal rights”, he added.

But Finke is dreaming bigger than the small town of Kesten. He aims to “conquer” the city of Hamburg, where at the St. Pauli Wine Festival drag queen and current wine queen of Hamburg Olivia Jones will crown him the new wine king.

If he endeavours to extend his reign and become national wine queen for the whole of Germany though, the odds are against him. German Wine Institute spokesperson Ernst Büscher explained that a man has never before clinched the national title. 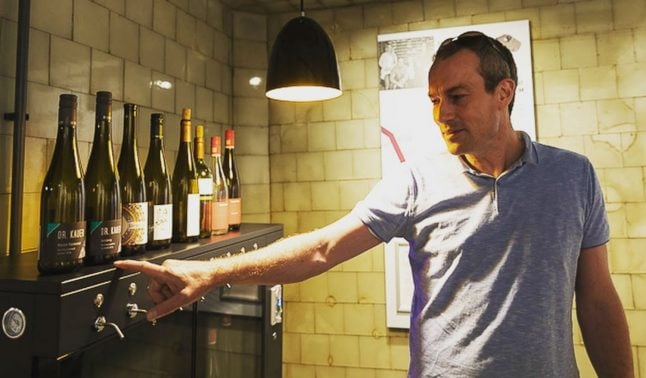 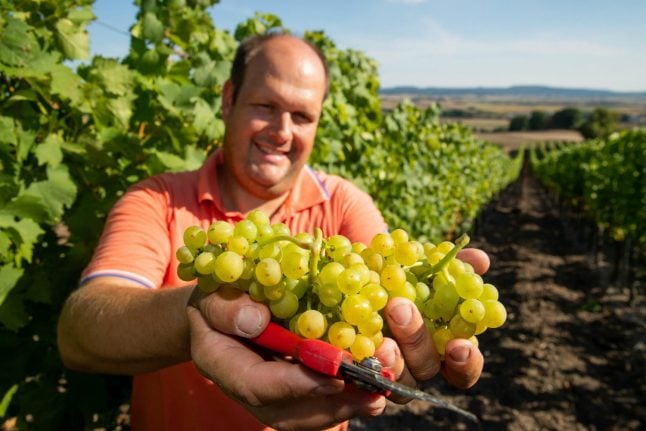 Hainz showing off wines at RheinWeinWelt in Rüdesheim. Photo courtesty of Jérôme Hainz.

Only when living abroad did Mainz-born Jérôme Hainz develop a passion for one of Germany's highlights: wine.

In a Chinese language course in Beijing, he was assigned a presentation on one aspect of German culture.

“Everyone was expecting beer, pretzels and pork knuckles,” said Hainz, who dug deeper and was surprised – and simultaneously fascinated – with the world of German wine.

The Bundesrepublik may be known for its beer, but it’s also the eighth largest wine producer in the world with 13 different growing regions. Each is known for its own distinct wine, whether the Silvaner of Franken or Pinot Noir of Baden. READ ALSO: 5 things you should really know about wine in Germany

He guides both private and group tours in English to wineries and tasting rooms, whether well-known Weinstuben (taverns) in Mainz, or scenic gems tucked away in hard-to-reach villages.

“Wines from Germany express a very strong sense of origin, for me that's the basis of my Heimatliebe (love for one’s country)” he said, as our small group drove past hilly vineyards perched alongside the Rhine River in September.

Stretched across 26,800 hectares, the so-called Rheinhessen is Germany’s largest wine-producing region, and is particularly renowned for its Riesling. It’s here that Hainz guides the bulk of his tours, as well as in the nearby Rheingau and Mosel regions.

“The valley of the Rhine River creates special conditions,” said Hainz. “You have the river at the bottom, shade of the forest at the top of the mountain, river that reflects light, a slope that collects warm sunlight.”

Hainz taking a lunch break with a touring group earlier in October.

Since 2008, the Rheinhessen has belonged to the international network of “Great Wine Capitals”, which also counts the Napa Valley in California and Porto, Portugal among its members.

But its regal reputation stretches back centuries: In the past, German wine was as well known – and expensive – as Bordeaux or Champagnes, said Hainz. “It’s fascinating to look at old, turn-of the 19th to the 20th century wine menus from the US, for example at the Waldorf Astoria. A lot of them came from Germany.”

It was commonly Jewish traders, many who lived in Mainz before World War II, who helped import it across the Atlantic, said Hainz.

Wine growing throughout the area dates back hundreds of years, however, as we stopped by the Rheingau’s Kloster Eberbach, a former Cistercian monastery which cultivated vineyards for production as early as the twelfth century.

“Wine was considered to be a commodity, and people drank it all the time,” said Hainz as we strolled through a dimly lit historic cellar, still stacked with wooden barrels.

We also made some stops which gave insight into modern Mainz, such as FLIK, a Sekt (sparkling wine) manufacturer.

Flik filling grape must. The juice coming just off the press, just starting its first fermentation.

Germans consume 400 million bottles of sparkling wine per year – about a quarter of the world’s production.

READ ALSO: Travel in Germany: Six reasons why Mainz is worth visiting this autumn

For Sekt made in the traditional method, the acidity of the base wine is higher than in normal wines, said owner and Winzer (wine maker) Rüdiger Flik, gesturing to a large metallic barrels with which he poured out samples.

Once the wine undergoes two fermentation processes, the sparkling wine needs to be stored for at least nine months.

The lees (or remainder of the yeast) are then removed in a process called disgorgement, in which a very small dose of sweetness may or may not be added – depending on the style that the Sekt manufacturer is intending.

“Many vintners talk about winemaking like raising children. You can only nudge vines in a certain way,” said Hainz as we later scooped up local Spundekäs cheese spread in pretzels at a Weinstuben in the centre of Mainz.

We also made our way to St. Anthony’s, a biodynamic winery in Nierstein, Rhineland-Palatinate known for its vineyards being situated on a special 280 million year old red rock formation called the Roter Hang. Each grape, grown on a special red slate soil, is picked by hand, said tasting room manager Bärbel Scheibl. Touring inside the cellars of St. Anthony's. Photo: Jérôme Hainz

This was followed by a stop at Weingüter Wegeler, which produces wine from vineyards almost directly at its doorstep in Oestrich, a small village along the Rhine. It also has several vintage wines in stock, such as the 1993 Winkel Jesuitengarten.

As they age, whites typically get darker and reds become lighter, pointed out Hainz as we noted the colour change of the oldest wines.

All of the wines belong to a so-called Großes Gewächs (or gG as it’s commonly written on bottles), Germany's highest quality wine certification. As we sipped one, so-called Kirchenfenster (literally church windows, or legs) formed on the side.

“Is this an indicator of the quality?”, I asked Hainz, reciting the one piece of knowledge I thought I had picked up from former trips through the vineyard-filled California countryside.

He paused, again surprising me with a fact I did not know. “The ‘Kirchenfenster' just indicate the viscosity of the liquid…but it offers little indication whether this is good or bad,” he said, picking up a glass of Riesling, and slowly swirling it around before taking a sip.

“The quality is defined by what you can smell and taste.” 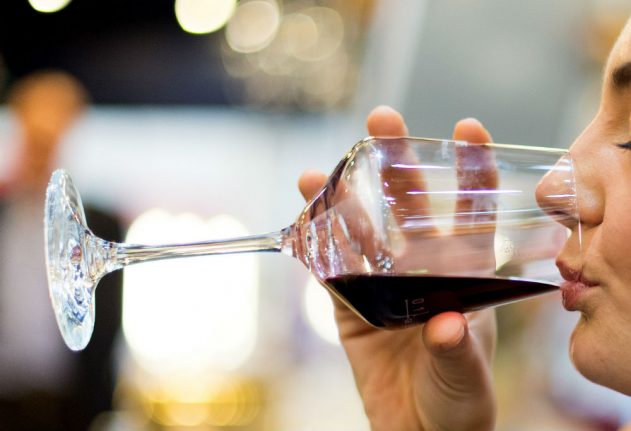 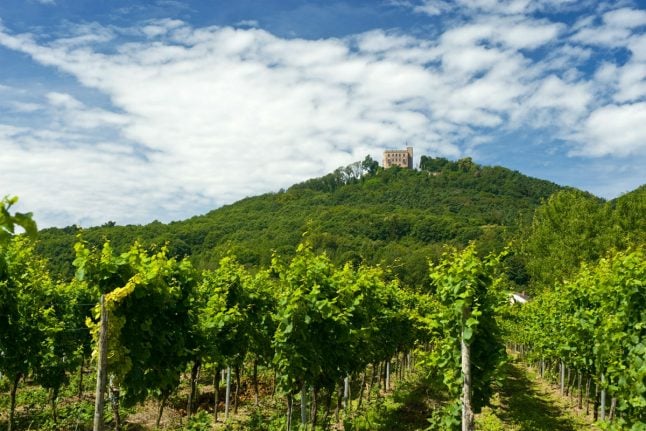 WINE
5 things you really should know about wine in Germany
Url copied to clipboard!