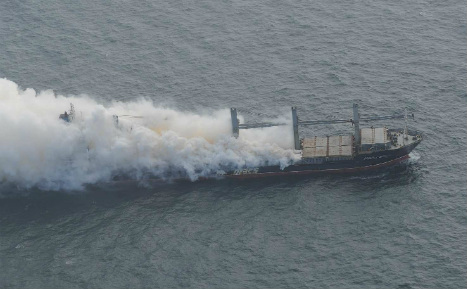 In the early summer of 2015, it was a slow news day in Germany and I was looking for inspiration in local newspapers. After a while I came across the story of a ship loaded with Düngemittel that had caught fire off the North Sea coast.

My attempts to track down the facts lasted the whole day and ultimately ended in frustration. But for a while it seemed possible that a ship full of cow manure was about to blow up just a few kilometres off the German coast.

On the morning of May 26th, several news outlets started reporting that the crew of a freight ship had had to abandon the vessel after its cargo caught fire. Furthermore the coast guard had issued a warning that the cargo could explode at any minute.

Luckily, no lives were in imminent danger, but pictures from the scene showed smoke billowing from the stricken vessel.

The word that had caught my attention though was the name of the cargo – Dünger – 1,300 tonnes of which were on board.

After double-checking in my German dictionary, I knew that it did indeed correspond to the English word dung, but I still wasn't certain whether the word referred to all fertilizer, or just the poo variety.

It wasn't the most hard-hitting news, but given that it was already a slow day, I started to imagine explosive excrement raining down on north-coast Germans as they tucked into their pickled herring brunches.

And of course I pondered the headlines that could go with it: “1,000 tonnes of poo set to blow over north German coast”, or “North Germany battens down hatches as poo storm looms”.

With little else on my plate that day, I decided to hunt down the truth about the poo.

Clearly though, other major question marks hung over the story such as, can manure actually explode?

I threw the question onto the office floor.

My colleagues looked back, somewhat perplexed.

But then one offered up: “Sure, it’s full of methane.”

A quick search on the internet confirmed that manure does indeed have explosive potential. A blast at a German dairy farm in February 2014 had been set off by explosive cow dung, researchers from Wageningen University claimed at the time.

This wasn’t the only cause of my doubts, though.

Is there really an export market for manure? Do German cows excrete pats of a quality that just can’t be found abroad?

A Google search on this theme was less conclusive. But I did see that Sweden had tight regulations on the import of manure, suggesting that there was at least a market for it.

My next thought was to see how Germany’s biggest tabloid, Bild, was reporting the story.

If there was manure on board, Bild wouldn’t have wasted a second in screeching out the headline “Amok Scheißeschiff!!” But the tabloid was reporting it straight. There was just a factual reference to burning Düngemittel at the top of the article. Coast guard work to put out the fire. Photo: DPA

I decided to call up the coast guard.

“The Düngemittel loaded on the freight ship off Cuxhaven,” I asked, “is it organisch oder künstlich?”

The spokesman replied that he didn’t know whether it was organic or artificial. They didn't have confirmation yet, he said.

I gave him my details and asked him to get in touch when they knew more.

After a little bit of research, I tracked down the ship's name – Purple Beach – and something called its IMO number.

As luck would have it, my sister’s boyfriend works as a shipping broker in London.

I gave him the name and number and he agreed to find out what he could.

Twenty minutes later he had an answer.

“The cargo is a fertilizer,” he said over the phone.

“But is it one of the natural variety, or chemical?” I asked.

I called the shipping company based in Hamburg to press for more information. But the lady on the phone would only say that I needed to speak to her boss, but that he was too busy. On the coast guard website, I found a new press release. It announced the danger of “odour pollution” in Cuxhaven and warned residents to shut their windows and doors.

If this Dünger stinks so bad, someone there must be able to tell me what it smells like, I reasoned.

So I called up the town hall in Cuxhaven.

“Hello. I'm a journalist writing about the ship stranded off the coast,” I said. “I was wondering if you've smelt anything funny in the air recently?”

“No.” But she hadn't been outside since the morning.

“Who do you think would know?”

“Try down by the harbour.”

I found a sea tour company with offices on the harbour.

“Hello, I've heard reports of a strange smell in the air. Have you smelt anything coming off the sea?” I asked.

“No,” the man replied, gruffly. “But the wind direction's wrong. Would be drifting right past Cuxhaven.”

I loaded the national weather site which reported that the wind was blowing south-easterly. After locating the the ship via an industry website, I found that the nearest landmass to the southeast was an island called Wangerooge.

But the receptionist at a hotel on the beachfront hadn't smelt anything either.

“Can you tell me what the wind direction is then?”

“Southwesterly,” she said after a pause in which she helpfully walked outside.

So I rang up seaside restaurants in Langeoog and Norderney, islands to the southwest of the ship. But the air there also apparently smelled of nothing but salt and seaweed.

As the afternoon dragged on, a further call to the shipping company was met with the tart response that the boss, as I could well imagine, was rather busy handling the fact that one of his ships was on fire.

The coast guard were still giving no further clue as to the contents of the ship.

As I left the office, the warning was still in place that the ship could explode, but I was no closer to finding out what was on it.

The next morning, I opened my inbox and found an answer from the coast guard: the fertilizer was artificial.

It took another day before enough water had been pumped onto the vessel and the all clear could be given.

So it was good news for the people of the North Sea coast. They could open their windows again without fear of cow dung falling into their herring salads.

All the same, for the internet it was the greatest viral story that never was.