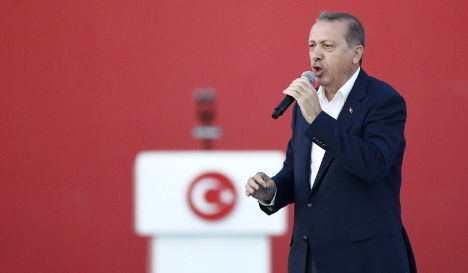 The Turkish leader was addressing a cheering crowd on Sunday night in Istanbul when he criticized Germany for not allowing him to speak via video link to a demonstration of his supporters in Cologne last week.

“Where is the democracy?” he asked.

Erdogan also condemned how German authorities had previously allowed a commander of the Kurdish militant group PKK to speak to a demonstration in Cologne.

“They’re only feeding the terrorists,” Erdogan said. “Like a boomerang, it will come back to them.”

Cologne authorities were concerned that Erdogan speaking to the demonstration, which drew tens of thousands, would rile up the crowd in the wake of a failed coup attempt in the country last month.

In his speech on Sunday, Erdogan also criticized Western nations for their response to the failed putsch.

“The West has not shown us that they are against the coup. Their silence is inexcusable,” he said.

Before the coup had been quashed, Chancellor Angela Merkel’s spokesman Steffen Seibert said that “democratic order must be respected,” and offered “support to the elected government”.

But in the wake of the coup, as Erdogan has enacted mass detentions of suspected putsch supporters including military members, academics and journalists, Germany has urged Turkey to treat the plotters lawfully and condemned the “revolting” reaction by supporters of the Turkish government.

Erdogan on Sunday again spoke of reinstating the death penalty, which German officials have said would put a stopper on talks for Turkey to join the EU.

Vice Chancellor Sigmar Gabriel told broadcaster ARD that he did not expect Turkey to become an EU member in the next ten or even 20 years.

But he added that the EU should continue to work to bring Turkey under EU standards.