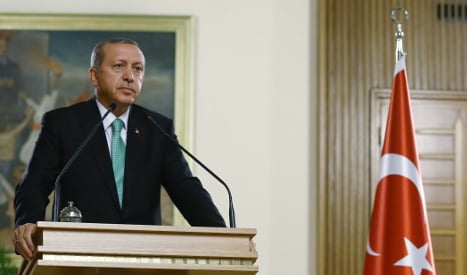 Left Party MP Sevim Dagdelen argued that Germany should issue sanctions against Erdogan in light of his “brutal” response to a military coup attempt on July 15th.

“We need to finally have sanctions against Erdogan and his brutal, repressive policies of torture and mass arrests,”  Dagdelen told the Neuen Osnabrücker Zeitung.

“His bank accounts must be blocked.”

Tensions between Germany and Turkey have been on the rise in recent months, especially since Erdogan’s crackdown in response to the failed coup.

The Turkish leader has carried out mass detentions of thousands of people suspected of supporting the coup, including military members, academics and journalists.

Germany blocked Erdogan from speaking via video to a rally of tens of thousands of his supporters in Cologne at the weekend, concerned that his speech would rile up the crowd.

On Tuesday German Foreign Minister Frank-Walter Steinmeier dismissed a Turkish threat to renege on a controversial deal with the EU to stem the migrant flow if it is not granted visa-free travel by October.

Asked if Turkey could “blackmail” the EU over the refugee pact, Steinmeier told the Rheinische Post newspaper: ”That is absurd.”

“The fact is there are conditions for the visa-free policy and they are known to everyone,” he said.

“Turkey pledged to undertake the necessary steps to hold up its end of the agreement. That is not yet the case and Turkey still has work to do.”

Steinmeier's Turkish counterpart Mevlut Cavusoglu had said in an interview with the German daily Frankfurter Allgemeine Zeitung on Monday that Ankara could withdraw from the accord if Europe failed to allow visa-free travel for Turks by October.

Vice-chancellor Sigmar Gabriel hit back on Monday during a campaign rally for a state election, saying “Germany or Europe must in no way let themselves be blackmailed” by Turkey over the migrants pact.

Turkey and the EU signed the disputed deal in March, in which Ankara agreed to take back Syrian migrants landing on Greek islands in exchange for political and financial incentives.

Chancellor Angela Merkel spearheaded the agreement with Ankara after Germany let in a record 1.1 million migrants and refugees last year.

In addition to visa-free travel, it includes billions of euros in aid and accelerated talks on Turkey's stalled bid for EU membership, but ties have been strained by President Recep Tayyip Erdogan's massive crackdown after the failed coup last month.

Now the deal is coming under increasing criticism in Germany. Green party parliamentary leader Katrin Göring-Eckardt said this week that it was a bad idea from the start.

Officials must create “legal and safe passage for refugees into Europe,” she argued, adding it was wrong to “hand over the Turkey deal” to Erdogan, in comments made to Funke Media Group newspapers.

“Whoever does not help Aleppo and then shirks the responsibility for the arranged taking in of refugees in Europe will always have new problems,” she said.

Human rights spokeswoman for the conservative Union parties (CDU and CSU) Erika Steinbach told Deutschlandfunk that the EU should free itself and its refugee policy from Turkey, arguing that Turkey’s membership negotiations should be halted and the refugee agreement should be called off.

“Turkey has unfortunately become an autocratic state,” she said.