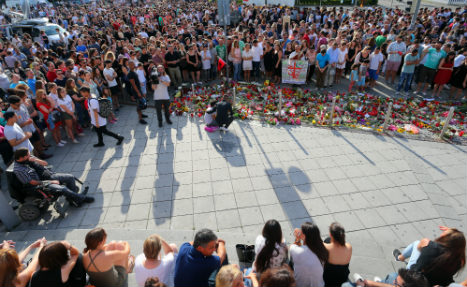 Special forces detained a 16-year-old friend of gunman David Sonboly on Sunday evening, who they believe knew about his plan to go on a gun rampage.

The teenager went to police immediately after the attack, which took place at a shopping centre in the north of Munich, to inform them that he knew the gunman's identity.

At first he was intensively questioned by police about his relationship to the gunman, but was then released as at that stage police did not see him as having a connection to the attack

This assessment appears to have changed over the course of the weekend, with investigators growing suspicious about contradictions in the 16-year-old's statement.

“We want to understand if he knew about the attack,” said a police spokesperson.

According to the Süddeutsche Zeitung, the two teenagers became friends while in psychiatric care.

Investigators are particularly keen to know whether the adolescent was involved in a call via social media for people to meet at a cinema near Munich’s central station.

The post bore a resemblance to the social media appeal Sonboly is believed to have made to lure people to the McDonald's where he started his killing spree.

Like the posting encouraging people to come to McDonald's, the cinema posting offered the possibility of a reward for those who turned up, namely a free film viewing.

Police searched the cinema on Sunday but found nothing out of the ordinary.

Doctors who treated the 18-year-old for a psychological illness said that there was a risk he would commit suicide but “no one had seen a risk that he would pose a threat to other people”.

However, a journalist for the Süddeutsche Zeitung who spoke with fellow pupils at Sonboly’s high school said they had told her that he had made threats to kill them or to carry out a gun attack.

At this stage there is no evidence that fellow pupils from Sonboly’s school were among the victims, all but one of whom were aged 21 or under.