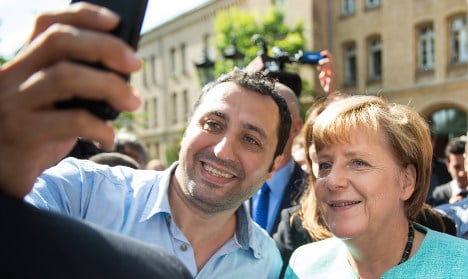 Speaking after four rampage attacks hit Germany in just seven days – three of which were carried out by refugees – Sahra Wagenknecht said that more needed to be done to help Germans feel “safer”.

“Although we must wait for a concrete explanation of the background of the attack in Ansbach, we can say this much: The events of the past few days show that the acceptance and integration of a large number of refugees and migrants is tied up with significant problems and is more difficult than Merkel tried to persuade us last autumn with her reckless ‘Wir schaffen es' [we can do it],” the left-wing politician declared in a statement.

“The state must now do everything to ensure that people in our country can feel safe again. That requires us knowing who is in the country and, as far as possible, where there is potential for danger. I think Mrs Merkel and the government now have a particular responsibility to retain the trust of the people in the capability of the state and its security authorities,” the statement from the leader of Germany's official opposition continued.

Three of the four attacks that struck Germany in the past week were carried out by asylum seekers; the Würzburg axe attack, the machete attack in Reutlingen and the suicide bomb in Ansbach.

It is unclear how many members of the party share Wagenknecht’s view. In January, she spoke out after the New Year’s sexual assaults in Cologne, saying that those who abused the hospitality offered by Germany had forfeited their right to stay in the country. This was met with backlash from other members of Die Linke, who said that this was not in line with the party's ideology.

The party has traditionally been among the biggest supporters of refugee rights in Germany. For example, its politicians spoke out against German laws which allow refugees' valuables to be confiscated as 'payment' for services they receive in Germany, with chief whip Matthias Höhn calling the practice “heartless”.

Höhn also seemed to challenge Wagenknecht's latest statement in a Facebook post, in which he said it was necessary to “counteract” rather than encourage the fear that people felt in the wake of the attacks. He said that “absolute security” is not possible, but that Germany was a very safe country in comparison to many, as well as stating: “Terrorism did not enter the country with refugees”.

The politician also said that investigation into the recent attacks had only just begun, and pointed to the fact that the four attackers seem to have been driven by different motives. Höhn concluded his statement by saying that “paying for security with our freedom” would be “too high a price”, and used France – which has been under a state of emergency since the attacks on Paris last November – as an example, saying “every limit on our freedom is a victory for Isis”.

However, Wagenknecht is not the only one to call for better checks to be carried out on refugees, and it is possible that the tide is turning even within her own party.

Andreas Scheuer, General Secretary of the CSU, called for all refugees in Germany to be vetted. “Every single refugee must be interviewed by the authorities and be closely checked, to avoid a general suspicion,” he said.

Rainer Wendt, chairman of the German police union, noted the other factors in the recent attacks when he spoke to radio station HR-Indo. He said that the events of recent days had shown “how mental instability, terrorism and crime mix together.”

Indeed, the refugee who killed a 45-year-old woman with a kebab knife was known to police for offences of bodily harm, and two of the four attackers had spent time in psychiatric care.

Wendt said that this made it all the more important “to look at these people very closely, to see whether they pose a potential threat”.

The city of Ansbach has said that it will review and strengthen its project aimed at caring for new refugees arriving in Ansbach; however, Mayor Carda Seidel said she did not think there had been a failure in refugee policy.

Die Linke is the third-biggest group in the German parliament and the largest ootside the government.