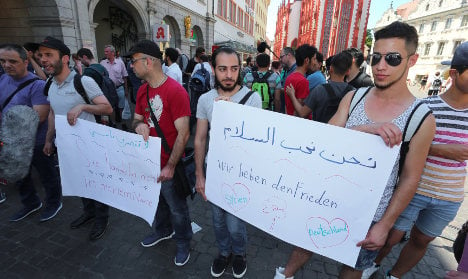 Refugees carry posters reading 'Not in my name' and 'We love peace'. Photo: DPA

Most of the participants were young men from Syria, reported broadcaster Bayerischer Rundfunk. Along with Afghanistan, the country which the attacker is thought to come from, Syria is one of the countries with the most nationals seeking asylum in Germany.

Between 25 and 50 people, mainly refugees but also some volunteers, joined the march Wednesday lunchtime in the centre of the north Bavarian town.

The demonstration had been organized after an adolescent attacked passengers on a train with an axe, seriously injuring four of them, while repeatedly shouting 'Allahu Akbar' (God is the greatest).

The demonstrators carried banners and the march was filmed via a Facebook Live stream. The man filming the group spoke in Arabic, Die Welt reported, and he explained that the goal of the march was for refugees to distance themselves for barbaric acts like that which took place on the regional train on Monday.

The majority of participants in the march came from nearby Ochsenfurt, the small town in which the attacker lived, first at an accommodation centre for young refugees then with a local foster family.

One of the demonstrators, 19-year-old Adnan, told Die Welt: “We are all sad and are concerned that people will avoid us on the streets”, adding that up until now, locals have been accepting of the asylum seekers and he has not experienced discrimination.

Adnan, who comes from Syria and has lived in Germany for ten months, said that he had seen the attacker on several occasions but had not known him personally.

A spokesperson for the Ochsenfurt volunteer group emphasized that the refugees had organized the march on their own initiative.

The majority of refugees in Syria come to Germany to escape Islamist violence in their home country, large parts of which have been taken over by the terror group Isis.

“Of course [the attack] has made some of us fearful that terrorism is now coming to Germany,” one volunteer who works with asylum seekers told the Suddeutsche Zeitung. However, he stressed the need to act “rationally” and added that he was concerned that the attack would lead to an anti-foreigner backlash.