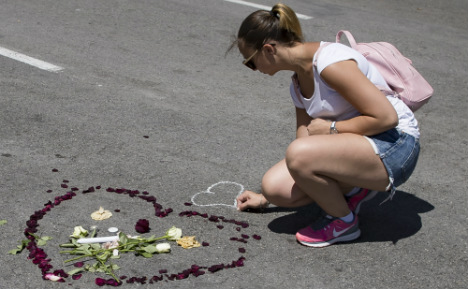 A mourner in Nice. Photo: DPA

The truck rampage which killed at least 84 people in Nice on Thursday evening was a shocking act of barbarity. The driver spared no thought for age, sex or nationality as he ploughed through crowds, killing 84 people, including three Germans.

But it would be a mistake to jump to the conclusion that this was an attack “on the entire free world”, as German President Joachim Gauck put it on Friday.

To suggest that “there but for the grace for God go I” robs reality of its complexity.

The idea that the threat level in Germany is comparable to that in France is something xenophobes also want us to believe.

It was only a matter of hours after the attack that Frauke Petry, leader of the far-right Alternative for Germany (AfD), tweeted that the only choice available was between closing borders to refugees and terrorism.

Conservative Interior Minister Thomas de Meziere is also constantly reminding us how high the risk of attack is here in Germany. In fact he is so concerned that last year he pushed through a law loosening data protection rights, claiming it was necessary in the fight against terror.

This law led Reporters Without Borders to demote Germany on its press freedom index, saying it had left reporters and their sources within government vulnerable to prosecution.

A war on France, not Germany

If the Nice attacker was indeed radicalized, it means France has been hit by three major terrorist attacks since the start of 2015, as well as several more minor incidents.

In the same time period, Germany has cancelled two major public events due to tip offs about a imminent attacks.

But, despite nightmarish stories of ambulances packed with explosives, not a single arrest has been made, either after a football match was cancelled in Hanover in November or New Year’s celebrations were called off in Munich.

In June, three arrests were made in connection to an alleged Isis plot against Düsseldorf. But revelations that the man who handed himself in to French police had prior connections to Germany’s foreign intelligence agency have raised questions about the credibility of this story.

Look back in German history and you will find only one incident which could plausibly be described as an act of Islamist terrorism.

In 2011 a Kosovan man shot and killed two US airmen at Frankfurt airport. Witnesses said he cried ‘Allahu Akbar’ before firing his weapon. But, as foreign military personnel were the targets, it is questionable whether it could be defined as terrorism, let alone an attack on Germany.

This is not to say that Germany does not face an Islamist threat.

In 2010 and 2014, German courts found two groups of men guilty of plotting terror attacks. The 2010 court case found the men had been scouting out targets inside the Bundesrepublik.

At the same time though, it bends credulity to say that Germany has simply been lucky, or that its security services are so good that it has been able to thwart the terrorists before they could realize their deadly fantasies.

If jihadists were determined to have struck Germany by now, they would have done so. The Nice rampage proves how horrifyingly easy it is to turn the most everyday of objects into a weapon of mass murder.

Why Germany is less of a target for Islamist fundamentalists than France is not easy to answer.

Germany’s historically low levels of unemployment no doubt facilitate smoother integration of minorities. In a recent study of Turkish Germans, 90 percent said they were happy or very happy in the Bundesrepublik.

Arguably Muslim migrants to Germany come from regions where a more peaceable form of Islam is practiced, in contrast to the radicalism of many mosques in Tunisia – homeland of Nice attacker Mohamed Lahouaiej Bouhlel.

It may seem like tempting fate to say so, but while European borders have disappeared for us they don’t seem to have done so for Isis or its supporters. We should keep this in mind when we react to terrorist atrocities.