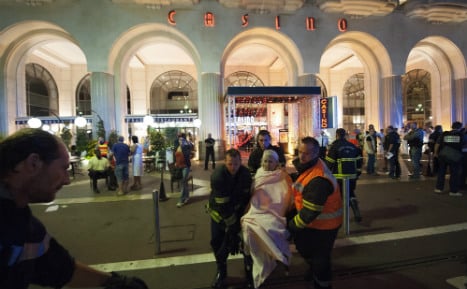 The Berlin school board have told broadcaster RBB that the teacher and two students from the Paula-Fürst-Gemeinschaftsschule in Charlottenburg, who were on a trip to celebrate the end of their final year exams, died in the attack.

But broadcaster n-tv have published a statement from the Berlin senate confirming only that three people from the city are missing, but describing reports of their deaths as “speculation.”

According to Berlin tabloid BZ, a further student from the school trip has been taken to hospital and another suffered light injuries. The tabloid reports that nine Berlin schools were on trips in Nice.

The German Foreign Ministry said on Friday morning that they could not rule out that Germans were among the victims.

The attacks happened late on Thursday when a gunman smashed a truck into a crowd celebrating Bastille Day in the resort town of Nice.

At least 50 children and adolescents were hospitalized by the attack, including two who died in surgery. A spokesperson for the Lenval Foundation children's hospital in Nice told AP that some of the children were still fighting for their lives.

An identity card found in the cabin of the large white truck belonged to a Franco-Tunisian man, aged 31, French media report.

Police sources told French media on Friday that the suspect had been formally identified and it was indeed the man named on the identity card. Nice's Matin newspaper named him as Mohamed Lahouaiej Bouhlel.

Follow The Local France for more updates on the Nice attack

Federal police said that “in agreement with French security services appropriate measures have been taken.”

Additional checks have been set up at airports as well as at the French-German border.

Germany “stands alongside France in the fight against terrorism,” Chancellor Angela Merkel said on Friday.

“We are all united in shock,” Merkel said on the sidelines of a two-day Asia-Europe summit, known as ASEM in Mongolia, adding that “words can barely express” what France's allies felt.

President Joachim Gauck said that “an attack on France… is an attack on the entire free world”.
Foreign Minister Frank-Walter Steinmeier said “we mourn with France and stand by their side at this difficult moment.”

Vice-Chancellor Sigmar Gabriel also expressed his condolences: “Horrible pictures are reaching us from Nice. Our thoughts are with the families and friends.”

Simone Peter, head of the Green Party in the Bundestag (German parliament) also said “our thoughts are with the victims and their families.”

Frauke Petry, leader of the populist Alternative for Germany party, wasted no time in using the attacks to criticise the German government.

“How many times?” she asked with the hashtag “borders instead of terror.”

In response Andreas Petzold, publisher of Stern magazine wrote “the woman simply refuses to understand… (the attacker was French).