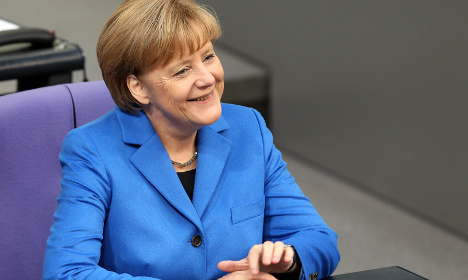 The poll was the second in a few days to suggest a popularity boost for the German leader.

Saturday’s poll, commissioned jointly by Stern magazine and Die Welt newspaper and carried out by the Forsa market research institute, showed Ms Merkel’s appeal up two points to 48 per cent.

The CSU was sharply critical of Ms Merkel’s decision to allow more than 1 million migrants to enter the country.

In a poll published on Thursday by public broadcaster ARD, 59 per cent of those surveyed said they were satisfied with Merkel.

The results of the monthly poll were up nine percentage points on June and was Ms Merkel’s best poll showing since September 2015 when she moved to open the country’s borders to more than 1 million asylum seekers.

The ARD poll, which surveyed 1500 people and was carried out by Infratest Dimap, showed that Ms Merkel’s CDU party and sibling party the CSU had gained two points in voter intentions.

The number of refugees arriving in Germany is falling sharply as a result of the closure of the Balkans migration route and the EU’s deal with Turkey, new government figures showed on Friday.

In April, May and June, the number was around 16,000 each month, less than a fifth of the tally seen at the start of the year, according to data from the government’s Easy computer system, which counts the number of arrivals who plan to seek asylum.

Support for the far-right Alternative for Germany party (AfD) was down at the start of July in both surveys after several months of gains.

As well as the decline in new migrant arrivals, the party has suffered from infighting among its leaders on what policies to adopt.