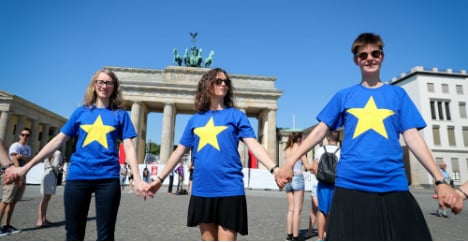 Germans are more satisfied with the EU following Britain's vote to leave, according to the monthly ARD-Deutschlandtrend poll, carried out by political research institute Infratest Dimap.

The number of respondents who felt that the disadvantages outweigh the benefits sank from 14 to 11 percent between June 24th and July 6th, with the remainder finding that they balanced each other out.

The positive attitude towards the EU is developing alongside fears of the international effect of Britain’s vote to leave.

When it comes to political allegiances, perhaps unsurprisingly, supporters of the Alternative for Germany (AfD) are the most Eurosceptic, with 45 percent finding EU membership to be overall negative.

A majority felt that membership of the EU was good for the economy (79 percent) and security (74 percent). Three quarters of those surveyed said they wanted more co-operation between member states.

However, Germans are not totally satisfied with the way the EU is run, with 61 percent saying that Brussels was meddling too much in national affairs – though this figure was still down by one point compared to before the UK referendum.

So how do they see the impact of the British vote to leave?

Two thirds of those questioned expected anti-EU parties in Europe to gain in popularity, while 40 percent predicted more countries would follow the UK out of the EU. Just over a third felt that the relationship between Germany and Britain would deteriorate following the vote.

However, the majority weren’t concerned about the impact of Britain leaving on Germany; just three out of ten felt that Germany’s economic situation would suffer due to the referendum. Indeed, financial experts have reassured Germans, saying Brexit doesn't pose a threat to their economy.

Germans also seem to be losing confidence in referendums, with only 42 percent saying they bring better political decisions, down from 54 percent in the previous poll. In Germany, it is not clear whether the constitution allows for a popular vote on the country’s EU membership.

To carry out the poll, Infratest Dimap interviewed a representative sample of 1004 eligible voters between July 4th and 5th.