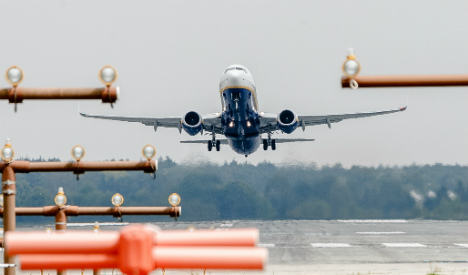 Touchdown? Photo: DPA
According to Zeit Online, staff rooms at Berlin Schönefeld, Cologne-Bonn, Weeze (Duisburg), Frankfurt-Hahn, Bremen, and Baden-Baden were raided. Officers seized computers, iPads, schedules, as well as other personal documents from the pilots.
It was also reported that 35 officers from the Koblenz state prosecutor's office and the local customs agents were involved in the national raids.
The investigations are targeting two staffing companies that handle the contracting of Ryanair pilots. In order to keep business costs down, Ryainair and other discount fliers hire companies that manage pilots under contract. These freelance pilots are then employed by the company without the company having to pay any of their social taxes, including healthcare, pension payments, and employment insurance.
Under investigation are two such contracting firms: Brookfield Aviation and McGinley Aviation.
Zeit Online reported that investigators were asking the pilots how often they work for RyanAir, if they are able to work for other airlines, whether they have employment contracts with any of the businesses involved and who handles their business dealings.
Under the freelance pilot business model, pilots are expected to each be their own business, however under German law, freelancers who work exclusively for one company are technically employed by said company.
The daily paper reported that there were around 1,600 pilots and co-pilots employed in this manner
“We hope that at the end of this investigation, this whole unfair business model is brought down,” said Jim Phillips, head of the international branch of the pilots union Cockpit.
At least two personal residences of pilots were also searched. The pilots are under suspicion of aiding the companies in their unfair practises.
Other allegations include that the companies withheld the pilots' pay until they had reached a certain amount of flying hours.
In a statement, Ryanair told the paper that the investigations had nothing to do with the company itself and that it was business as usual for the Ireland-based company.
Ryanair chief executive Michael O’Leary boasted to Die Zeit that his airline would crush their German competitors within the coming years.
He prophesied that Eurowings would be shut down by Lufthansa while Air Berlin would be sold off by co-owner Etihad.
The Irish carrier have followed an aggressive expansion strategy into the German market in recent years and plan to increase their market share to between 15 and 20 percent by 2020.
Ryanair responded to the raids by saying: “Ryanair has met with, and agreed to assist, the German tax authorities with their enquiry into a number of individual contractor pilots.
“The German tax authorities have confirmed that Ryanair is not the subject of any tax investigations. Ryanair requires all of its pilots, both directly employed and contractor, to be fully tax compliant at all times. Should the German authorities require any further assistance, we’ll be happy to provide it.”