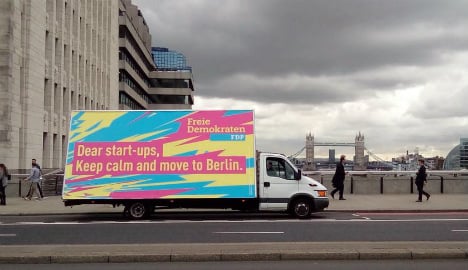 “The vultures are circling” read one commentary. After France tried to woo banks to Paris, the Berlin branch of the Free Democratic Party (FDP) is making an effort to woo London startups to the Hauptstadt.

“It fits exactly to the FDP campaign 'For the next Berlin',” spokesperson Wulf Oehme told The Local. “The FDP has a Plan B (as in Berlin). We're seeing a lot of popularity among young entrepreneurs, regardless of where they're from.”

As part of its publicity campaign ahead of city senate elections, the Berlin faction of the Free Democratic Party (FDP) has sent a billboard around London with a very British message.

From the country that invented the word “Schadenfreude.” The FDP is driving this truck around London today. pic.twitter.com/zGEuLxonhQ

“With its position in central Europe, as well as its stable business climate and the supporting infrastructure that's already in place, you can understand why more businesses are considering Berlin as the place to go,” Rob Harrison, spokesperson for the UK Liberal Democrats in Germany, told The Local on Tuesday.

“For German startup founders, the Free Democrats are the only party that best supports their interests. No other political party are pushing for a lively and growing founder culture,” read a statement by Heimat, the Berlin-based agency behind the campaign.

The Berlin FDP is campaigning locally with the message of Plan B, which is certainly fitting for startup businesses in Britain after UK voters made the future a whole lot more uncertain by voting to leave the EU.

“There's been a lot of hearsay about businesses already losing with the vote to leave, but I think the real uncertainty is long-term funding and financing provided by the EU itself,” Harrison said.

The FDP are sister party to the Liberal Democrats.

On the day of the Brexit vote, Mike Butcher, head of Tech Crunch Europe, tweeted that he had already heard of businesses which had lost out on investment that was contingent on Britain staying in the EU.

Today I have been told at least 3 UK startups lost deals from EU-based investors because funding was conditional on Remain to win.

On the day the Brexit results were announced Florian Nöll from the German Startups Association said that the vote would turn Berlin into Europe’s startup capital.

“The German startup capital of Berlin is the winner of Brexit, London is the loser,” he said.

Harrison, who is also a lawyer working with international startups looking to set up in Europe, said that London is already losing out to the German capital.

“Until now, London was always the favourite, but there's been a recent shift of interest to Berlin,” he said, citing the stability, opportunities, and infrastructure led by city institutions like Berlin Partner as reasons for the change.

But when it comes to his own country, while he appreciates the FDP's message and political goals, the Lib-Dem politician admits that seeing it makes him “a little sad”.

“While I understand why they've done this, it does go against the spirit of collaboration that the EU has always fostered,” Harrison said.