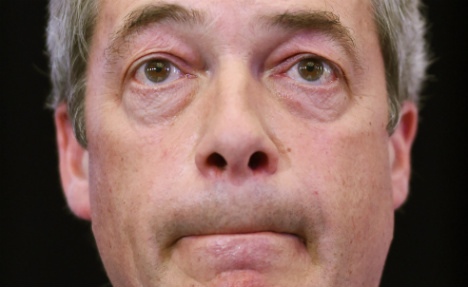 Farage announced on Monday that he was stepping down as leader of UKIP, saying he wanted his life back.

But critics have accused him of irresponsibility, as the decision means he will disappear from the political lime light with the UK's exit from the EU, which he has long sought, looking set to become reality.

“First they lied and stirred up anger, then they created chaos and now they’ve run away. Nigel Farage and Boris Johnson show what’s important to them – not the vote in their country but pure egoism,” said Axel Schäfer, deputy leader of the Social Democratic Party (SPD) in the Bundestag.

The SPD also called for Farage to give up his high-paying position as an MEP in Brussels.

Alexander Radwan from Chancellor Angela Merkel’s conservative Union alliance wrote on Twitter that it was “one resignation after another from the anti-EU lot. A late realization that they can’t lead their country. Hopefully not too late.”

Manfred Weber, leader of the conservative European People's Party in the European parliament said: “Nigel Farage says 'he wants his life back.' He should rather think about the lives of all the Brits he has cut off from Europe.”

.@Nigel_Farage says “he wants his life back”. He should rather think about the lives of all those Brits he has cut off from #Europe. #Brexit

Major media outlets gave the story top billing on their websites throughout the afternoon.

Conservative daily Die Welt billed the story as “the next leader betrays the Brits”, while Zeit Online, website for the country’s largest weekly newspaper, chose “The end of the pub politician.”

“Now, while he can see himself as victor after he declared that referendum day on June 23rd was his personal independence day, he is going. How incredibly cowardly that is. What a con artist,” wrote the SZ.