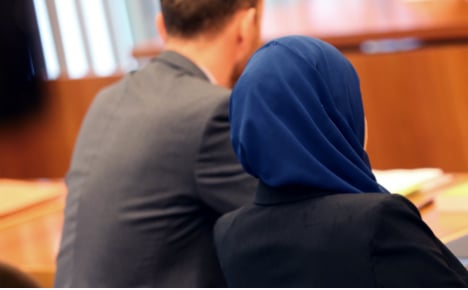 Aqilah Sandhu was one of the star students in her year at the law faculty at Augsburg University, the Süddeutsche Zeitung reports.

So when she appeared before the city court on Thursday, the judges already knew who she was.

One of the them “had been very satisfied” with her when he adjudicated her in state exams.

Now Sandhu isn’t just known in legal circles in Augsburg – she has been making headlines across Germany after she took the state of Bavaria and its legal system to court for its attempt to ban her from wearing a headscarf at work.

The battle started after Sandhu successfully completed her state exams and started a traineeship with the Bavarian judicial system.

In July 2014, the highest court in the state sent her a letter informing her that she was forbidden from interrogating witnesses or fulfilling other legal duties as long as she continued to wear a headscarf.

“As soon as I saw the letter I knew it was unlawful,” she told the court.

She immediately asked for an explanation of the ban, to which she was told “[religious] clothing and symbols can impair the trust in the religious neutrality of the administration of justice.”

But the state of Bavaria has no law forbidding legal trainees from wearing religious symbols, so Sandhu took the Bavarian legal system to court.

“I felt very strongly discriminated against. I felt neglected in my training,” Sandhu told the court.

She described how she was excluded from certain activities of the traineeship because of her headscarf.

On one occasion the judge who was training her would only allow her to see pictures that were part of a court process after the process was over, as otherwise she would have had to step up to the judges' desk – an area she was forbidden from entering.

“I believe in the principle of merit here in Germany and I think it is a shame that I am being reduced to my outward appearance,” Sandhu said.

Judge Bernhard Röthinger decided that the young lawyer was in the right, agreeing that there was no legal basis for the state's attack on her religious freedom.

But the Bavarian state has rejected the court’s decision and says it will appeal.

Last year the Constitutional Court ruled against blanket bans on teachers wearing headscarves – in force in half of Germany's 16 states – saying that they were “constitutionally limiting”. The court said headscarves should be permitted as long as they do not cause some form of disruption in the schools.

Also last year, Berlin officials decided that a young Muslim woman would be allowed to wear a headscarf to start a law traineeship in the public sector in a case that set off major debates about religious freedom, neutrality and integration.