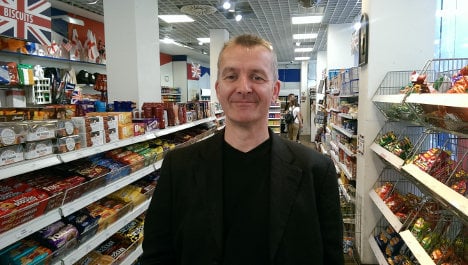 McWhinney has lived in Germany for 30 years. He now owns three stores under his brand The English Shop, starting with his flagship in Cologne.

He’s the kind of person who has enjoyed many of the benefits of the EU: the ability to move and work freely across borders. Free trade to sell English novelties at his shops in the Cathedral city, as well as in Dortmund and Bonn.

So when the 53-year-old from Edinburgh starts openly talking about his support for the UK to leave the EU, it comes as a surprise.

“I wanted Europe to get a good hard slap, and I’m still for that,” McWhinney tells The Local.

It’s a perspective that runs counter to how most expats see the UK’s vote to leave last week: a poll conducted by The Local before the referendum found that nearly seven in ten British expats backed the Remain camp.

And it wasn’t until recently that McWhinney flipped to the Leave side.

Two weeks ago, he was visiting some friends who had a business in Luxembourg and they told him they were having to shut down.

When he asked them why they hadn’t told him sooner about their financial difficulties, they said they hadn’t realized how bad it was.

“That’s when I snapped.”

He said all the paperwork of complying with EU regulations can be overwhelming for businesses.

McWhinney feels the EU hasn’t been effective in its promises to create jobs and make things easier for starting a business internationally.

“I’d make things simpler and more business friendly… I wish the EU was a great many things. I wish the EU would roar, I wish when the EU spoke, people would listen.”

First shock, then ‘let’s get on with it’
The English Shop in Dortmund. Photo: Private.

Still, it wasn’t McWhinney's exact preference for the UK to leave. Having lived outside the UK twice as long as the 15-year limit to be eligible to vote, he couldn’t actually cast a ballot. But if he could have, it would have been more in protest than wanting the UK to go it alone.

Though he was initially shocked by the results, he said his reaction later was “let’s get on with it”.

“I’d prefer the EU to be a more efficient, humane and fair place,” the former engineer says. “But if leaving is what it takes, then so be it.”

He hoped that the Brexit vote would be a sort of wake-up call for the EU, but he says so far he doesn’t see that.

“You don’t see the EU going ‘ouch, we’d better get it right next time’.”

While McWhinney has been outspoken in the media about his personal views, the staff at his stores have also openly shared their views – but quite to the contrary.

“I told him ‘you can’t be for Leave, that’s insane’,” Victoria Weatherall, operations manager for The English Shop, tells The Local with a laugh.

“We’re all almost Brexit specialists because we know both sides of the story.”

The banter was respectful though, and McWhinney didn’t mind at all when the staff ran a ‘hug a Brit’ campaign for customers to post pictures of themselves on social media.

“You won’t find me stopping people from hugging each other,” he says.

Nor was it a problem when the Bonn store put up a sign reading: “Britain might have left the EU, but we’re still here. So a little part of Britain survives in the EU.”

But with much still up in the air on exit negotiations, things are also divided within the shops on the matter of how the vote will ultimately impact business.

“My fear is mostly that the beautiful spell of Great Britain will be broken for customers, that customers will think ‘no thank you, we don’t want to be associated with Great Britain anymore’,” Weatherall says.

“The feedback has been overwhelmingly positive,” he says.

He’s also not concerned about any potential new regulations or price increases.

Despite his unhappiness with the EU, McWhinney does have some hope for the future.