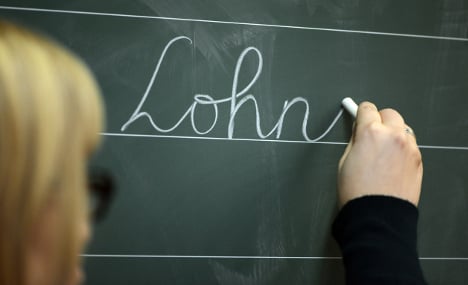 Nearing her retirement in 2009, the teacher stopped working a full 41 hours per week and dropped to 18, Spiegel reports.

But the state, already deeply in debt, made a mistake and continued to pay her a full salary.

This went on for six years until she retired. Only when the state was working out her pension did they notice their slip-up.

And now the 65-year-old former teacher has had to answer in front of a Düsseldorf court, on trial for fraud.

According to the prosecution, she should have notified the state of the mistake.

But on Monday the teacher told the court that her husband took care of their joint bank account.

He just didn't notice her salary had stayed the same after she began working part-time, she said in floods of tears.

The prosecution smelt something fishy and didn't find it believable that the accused wouldn't notice being paid so much for nearly six years.

North Rhine-Westphalia's salaries office claimed the origin of the whole problem was a typing error committed by one of their own.

They are responsible for calculating and paying out the salaries of 160,000 teachers in the state, among other professions. According to the office, it is inevitable that some errors will come about.

But the court was more gentle on the retired teacher.

It ruled that it was ultimately the fault of the state that the error occurred and gave the teacher three weeks to determine whether she is in the position to repay the money.

If she can pay the money back, the case will be dropped due to its “triviality” the judges ruled.