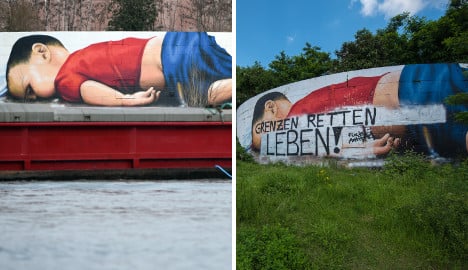 Before and after the vandalism. Photos: DPA.

The 20-metre-by-6-metre (66-foot-by-20-foot) colour painting of three-year-old Aylan Kurdi, whose body washed ashore on a Turkish beach last year, was smeared with silver paint and the scrawled message “Borders save lives!”, a police spokesman told AFP.

Directly next to the image, which had been painted with official permission by artists Oguz Sen and Justus Becker on a wall next to the city's Main River in March, was a vulgar far-right slogan targeting leftist opponents.

“We don't know who is behind it,” the spokesman said, adding that a criminal investigation had been launched.

The mural, which was visible from the nearby European Central Bank headquarters, had already been splashed with white paint soon after it was inaugurated, according to media reports.

Supporters have started a fundraising drive on Facebook to allow the artists to restore the image.

Thousands of asylum seekers continue to attempt the deadly sea crossing to Europe in rickety vessels from the Middle East and Africa.

Many of those who have died at sea trying to reach European shores were children. The image of Kurdi stunned the world when it was published last September, driving home the human cost of the migrant crisis.