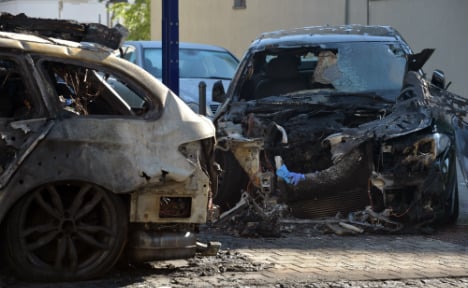 Burned out cars in east Berlin on Thursday. Photo: DPA

After 200 police officers raided a formerly occupied house in the legendary Rigaer Strasse in east Berlin on Wednesday morning, anarchists got mad.

In Kreuzberg people wearing masks ran down one street early on Thursday morning leaving a “trail of destruction” as Berlin daily Morgenpost reports.

The masked men smashed in the windows of three cars and the back of a bus stop. They then set a rubbish dumpster on fire and threw stones and paint bombs at the district council offices.

Police were later present at the scene to collect DNA evidence.

In various other locations in the east of the capital, rioters also caused damage, burning building machines in Pankow and smashing in the windows of banks in the central Mitte district.

“There haven’t been any arrests yet,” a spokesperson confirmed to Morgenpost.

During the police operation on Wednesday, officers secured the address on Rigaer Strasse 94, as builders cleared out a workshop and a bar with links to the far left scene.

As part of their search of the building, police secured batons and a gas pistol.

In the 1990s, tit-for-tat battles between far-left groups and police were more common occurrences, with Labour Day on May 1st in Berlin particularly associated with street battles.

Rigaer Strasse remains one of the last strongholds in Berlin of the squatter movement, with house 94 being one of the few remaining houses occupied since the fall of the Berlin Wall in 1989 and German reunification.

Despite anarchists still reserving a special hatred for die Scheiß Bullen (the damned cops), such large-scale, left-wing violence has become much more sporadic in recent years.

In January though, police raided Rigaer Strasse 94 after a group of masked people was alleged to have beaten a parking officer.

In February, far-left groups burned cars in apparent revenge for the raid, with anonymous users of a far-left forum threatening €1 million in damage for every police raid on their squats in Rigaer Strasse.

This was linked to a rise in far-right violence, which shot up by 35 percent.

The refugee influx seems to be the root cause, as far-right groups have reacted violently, with far-left groups attacking them in response.