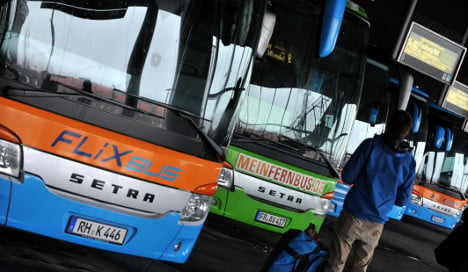 It was 10.25 pm on Sunday evening, and the 22-year-old mother had put her baby son to sleep in anticipation of the long journey ahead of them, police report.

Before they left Munich for Berlin, she told the bus driver that she was going to use the bathroom, and expected him to wait for her.

But when she returned from the station toilets, the bus was gone and so was her 1-year-old child.

Thinking she had meant she would use the bathroom on the bus itself, the driver had pulled away from the station and started the six-hour journey.

After a while someone on the bus noticed that the baby seemed to be travelling all alone, and she notified the police.

Back in Munich the woman explained her situation to service personnel at the bus station who gave her the route that the driver would be taking from Munich to Berlin.

But they didn't have the driver's phone number, making it impossible to contact him.

Police officers arrived at the bus station and decided to give chase to the bus on the Autobahn with the mother in the back seat.

They then left their contact information at the bus station, so that they could be informed once the driver's phone number was known.

After some time the driver could finally be reached, and he told the police that he was already in Ingolstadt, a city over 80 kilometres north of Munich.

The driver was told to wait for the police at Ingolstadt's Nordbahnhof station.

At the end of a long, dramatic ordeal, the mother was finally reunited with her baby boy.

While the mother was shaken, the young boy was completely fine – in fact, he had slept the whole way.