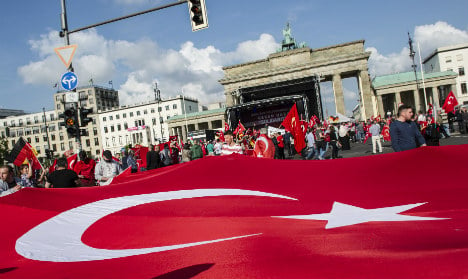 A total of 47 percent of the 1,201 respondents said that “following the tenets of my religion is more important to me than the laws of the land in which I live.”

One in three respondents, meanwhile, agreed that “Muslims should strive to return to a societal order like that in the time of Muhammad.”

Once again, this point of view was more strongly held in the first generation (36 percent) than in the second and third (27 percent).

Twenty percent said that the threat which the West poses to Islam justified violence. Seven percent said violence was a justifiable means of spreading Islam.

The report's authors assessed that 13 percent of people they spoke with were religious fundamentalists based on the answers they provided. Stark inter-generational differences were also evident in attitudes regarding the role of women in society.

While just under half of first-generation Turkish immigrants said that women belong at home, by the third generation this figure had shrunk to 27 percent.

Nonetheless, 57 percent of the second and third generations said that “a small child will definitely suffer if his mother has a job.”

Religion also plays a strong role in how Turkish Germans view other people.

SEE ALSO: One in 10 Germans wants country to be ruled by 'Führer'

Although 80 percent said they had a “very positive” or “rather positive” attitude towards Christians, under half said the same about Jews and atheists.

The study also revealed a radically different perception of Islam among Turks as in the wider German population.

While 6 percent of Germans as a whole associate Islam with human rights, 57 percent of Turkish Germans do.

Similarly the 65 percent of Turkish Germans who think of Islam as standing for peacefulness is in marked contrast to the 7 percent of the wider population who hold this view.

At the same time, there was wide belief that one had to conform to German values to succeed.

Over 80 percent of respondents said that one must respect German law if one wants to successfully integrate, while 70 percent said they wanted to “absolutely and unconditionally” integrate into German society.

While 90 percent of German Turks said they feel happy or very happy in Germany, half of all respondents said that they felt like second-class citizens in the Bundesrepublik – 54 percent said that “no matter what I do I will never be recognized as a part of German society.”

The results are not without their contradictions, the report notes.

While respondents expressed anger that Islam is falsely understood in Germany “quite a few of them hold onto religious positions which don’t do much to counter the magnitude of suspicions and mistrust.”