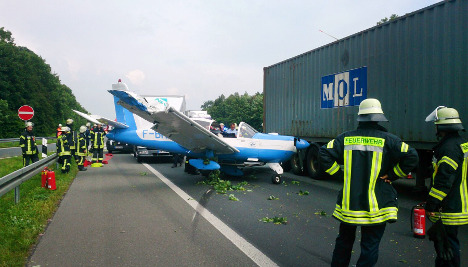 The pilot was flying his single-engine Morane-Saulnier Rallye plane over western Germany on his way to Lower Saxony when the engine cut out and the plane instantly started losing speed and altitude.

Immediately after noticing the danger, the pilot contacted the nearest control tower. He was instructed to land the plane at Oelde, a nearby airport.

But he soon realized that his rapidly decelerating steed would not make it that far, and instead started looking for an alternative site to land.

Spotting a big enough stretch of  the A2 Autobahn, the man from Basel made the cool-headed move of directing the falling plane onto the tarmac, aiming for the emergency lane on the side where traffic was moving in the same direction.

But at the last moment he had to swerve to avoid a road sign and ended up landing on the oncoming traffic lane.

One of the wings hit an approaching truck, which sent the plane spinning so hard that the opposite wing also collided with the vehicle, the police report states.

The plane and truck came to a halt on the right-hand side of the Autobahn, leaving only the far-left lane for cars to pass.

Jesco Gravemeier, a flight instructor at the VAP Flight School in Nordhorn, told The Local that the pilot made the right call.

“An empty Autobahn is just like a runway,” he said, explaining that it is much safer to land on a clear Autobahn and risk obstructing traffic than to land on a field and risk harm to the plane and the pilot.

Incredibly, nobody was injured in the incident.

“We all got really lucky there,” said Police Chief Timo Landherr, according to a report by the Lippische Landes-Zeitung (LZ).

Also speaking to LZ, the passenger in the truck said “adrenaline suddenly shot through me, all the way to the tips of my hair.”

The plane blocked the A2, which connects several major cities such as Hanover, Braunschweig and Dortmund, for over an hour. This left queues up to eight kilometres long.