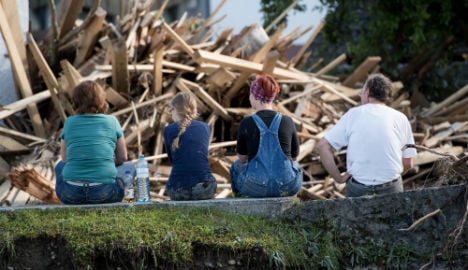 Locals and volunteers take a break during work to clear up the damage from flooding in Simbach am Inn in Bavaria. Photo: Sven Hoppe/dpa
Eleven people have been killed in the German states of Bavaria and Baden-Wuerttemberg, and two in Romania, while a beekeeper died in Belgium while trying to save his hives.
A further eight people were seriously injured on Friday after being struck by lightning at a rock festival in western Germany on Friday night, the festival organiser said.
“The emergency services said that at least 42 festival-goers were taken to hospitals in the region. Eight of them were seriously injured,” said a statement on the website of the Rock am Ring festival, which is held in the town of Mendig, near Koblenz.
Last week's floods were so powerful that water swept away the entire stock of a sawmill in the German town of Simbach am Inn, leaving huge stacks of splintered wood blocking the streets of the devastated town.
On one street, passers-by were greeted by the surreal sight of a car parked vertically against the wall of a house, pushed there by the floodwaters. Many other vehicles lay flipped over in roads blanketed by mud.
The dead in Simbach include three women from the same family — a mother, grandmother and daughter — who had been trapped in their house.
“The water was so quick that practically no residents had the time to run away,” police spokesman Armin Angloher said.
Police said a man's body had also been found in a house in Simbach, while an 80-year-old woman was found dead in Julbach a few kilometres away. Her house had collapsed under the weight of the floodwaters.
The deaths bring the toll from the floods to eleven, including four others were killed earlier this week in the southern German region of Baden-Wuerttemberg region.
Several others are still missing, a police spokesman in Bavaria state told AFP.
“We fear the worst,” he said, adding that divers have been sent to search for the victims.
German Chancellor Angela Merkel told a press conference: “I am crying for the people who have lost their lives in these floods. I am by the side of families who have been plunged into this devastation.”
Schools and roads have also been flooded in Austria in recent days, though the waters have now receded.
But forecasters in both Germany and France were warning of more torrential downpours in the next 24 hours.
The severe weather began last weekend with lightning strikes which left several children in Paris and western Germany fighting for their lives.
In Simbach, the waters had subsided largely subsided by noon on Thursday, leaving only the town's main artery still flooded.
Grim-faced residents were examining the damage, trying to shovel mud out of their ruined homes.
Many local businesses have been ravaged by the floodwaters and by the trunks of wood that rushed down from the saw-mill, smashing into their store-fronts.