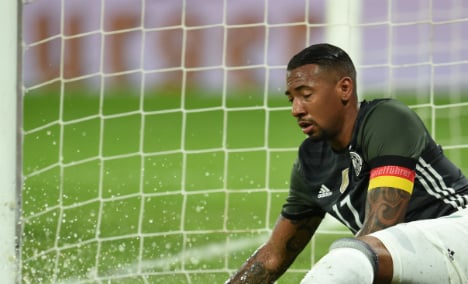 Alexander Gauland, the deputy leader of German political party AfD (Alternative for Germany), has just remarked that Jérôme Boateng, a member of the national football team, is not the kind of person most Germans would like living next door to them.

His precise words, as quoted by the newspaper Frankfurter Allgemeine Sonntagszeitung, were that “people like him as a football player. But they don’t want to have a Boateng as their neighbour.”

As many media have pointed out, Boateng – a beloved Bayern Munich defender as well as national player – is the son of a German mother and a Ghanaian father, and grew up in Berlin. An image of the Boateng brothers Jerome, George and Kevin-Prince adorns a house wall in Berlin's Wedding district. Photo: DPA

As well as being a teetotaller and practising Christian, Boateng is seen as enough of a role model to fill in for absent captain Bastian Schweinsteiger in a friendly against Slovakia on Sunday – a role he might reprise at the upcoming Euro championships in France.

Gauland, though he probably thought he was too smart to avoid saying so directly, is implying that “a Boateng” is a black person, and that most white Germans wouldn’t like to live next to one.

His dog-whistle gives rise to an obvious question: if even Boateng, one of the most respected footballers in Germany, both on and off the pitch, is not a good enough black neighbour for the average white German, then which black person is?

Presumably, in Gauland’s private and unguarded moments, the answer is: “Absolutely none of them”.

Gauland has since apologised for his comments, stating that “I don’t know him [Boateng] and would never come up with the idea of denigrating his personality.” Here, at least, he was being honest: he doesn’t know Boateng, and he wasn’t interested in Boateng’s personality at all. Children wave a placard reading “Jerome, move in next to us” at Sunday's Germany-Slovakia friendly. Photo: DPA

Instead, he was interested in using Boateng as a prop to peddle the AfD’s latest brand of racial and social division, and the most intriguing thing about his comments is how bold his party is becoming.

Just a few weeks ago, its members met in Stuttgart to discuss the party’s new direction, deciding that a rejection of Islam would be the AfD’s main focus.

Gauland’s remarks about Boateng seem to make clear that even Christians are incompatible with German culture, disqualified by virtue of being black.

The response to Gauland’s comments, both from within his party and without, was swift. AfD leader Frauke Petry, tweeted that:

“Jérôme Boateng is a great footballer and rightly part of the German national team. I am looking forward to the Euros. #Neighbours.”

Yet, for all Petry’s conciliatory words, there appears to be no disciplinary action against Gauland. He remains deputy leader of the AfD, and one might wonder just how much Petry truly disapproves of his views: for everyone else, there has never been a better time to pay them close attention.

The AfD has been making notable gains due to its critiques of Angela Merkel’s refugee policy, and has successfully positioned itself as an anti-immigration voice.

Yet it is one thing to be wary of the economic disadvantages of immigration, and quite another to say that white Germans shouldn’t be at ease with a dark-skinned man next door.

In the space of just a few months, the AfD has taken aim at refugees, then at Islam, and now at black people.

This is a position that has swiftly moved from apparently political, to supposedly cultural, to openly racist. For as long as Gauland remains as the deputy leader of his party, and possibly for long beyond that, the AfD are declaring precisely who and what they are.

Time will tell how many new recruits they draw to their cause, and how many voters genuinely feel that Germany is not a place where a Boateng can belong.