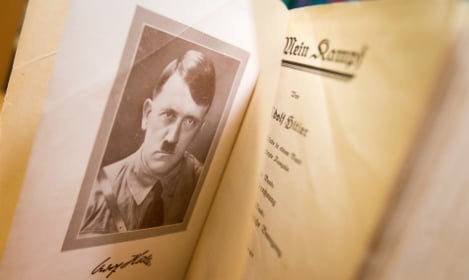 An original edition of 'Mein Kampf' featuring a photo of Hitler on an inside cover. Photo: DPA

Re-publishing the original tract is illegal under German laws against inciting racial hatred, although a version for historians with thousands of critical commentaries was allowed to go on sale this year.

Prosecutors said “we are investigating whether to level charges” against publisher Der Schelm, based in Leipzig in Germany's formerly communist east, national news agency DPA reported.

The publishing house is taking orders on its website for an “unaltered reprint” of the 1943 edition published by Hitler's Nazi regime.

Partly autobiographical, “Mein Kampf” — which means “My Struggle” – outlines Hitler's ideology that formed the basis for Nazism. He wrote it in 1924 while he was imprisoned in Bavaria for treason after his failed Beer Hall Putsch.

The book set out two ideas that he put into practice as Germany's leader going into the Second World War: annexing neighbouring countries to gain “Lebensraum”, or “living space”, for Germans, and his hatred of Jews, which led to the Holocaust.

Bavaria was handed the copyright of the book in 1945, when the Allies gave it control of the main Nazi publishing house following Hitler's defeat.

For 70 years, Bavaria refused to allow the inflammatory tract to be republished out of respect for victims of the Nazis and to prevent incitement of hatred.

But “Mein Kampf” fell into the public domain on January 1st this year, and the Institute of Contemporary History of Munich has published the special edition with critical annotations by historians.