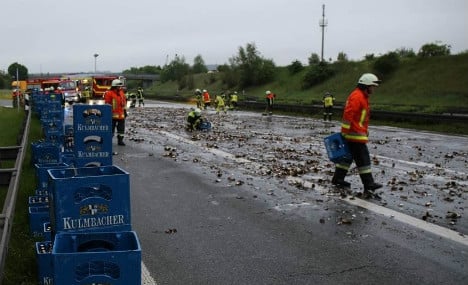 The clean up near Bayreuth. Photo: DPA

It is surely one of the most precious cargoes of all – thousands of litres of German beer, brewed according to the ancient Reinheitsgebot (purity law).

But the driver of a truck transporting the alcohol along the A9 Autobahn still failed to properly secure it, Bayerische Rundfunk reports.

As he drive around a left-curving section in the road just north of Bayreuth, the 230 crates burst through the trucks tarp and ejected their cargo 100 metres across the busy road’s three lanes.

Fortunately, no one was injured in the accident

It took several hours for the debris to be cleared from the lanes, as the motorway was completely shut down.

The driver can now expect a substantial fine for his carelessness.

This hardly the first time that Germany's national drink has caused a complete shut down of a German Autobahn.

In November 2015 a spillage of thousands of cans of the golden drink shut down the motorway near Hanover. In 2014, meanwhile, a truck carrying Bitburger beer toppled over near Duisburg, also leading to a shutdown.