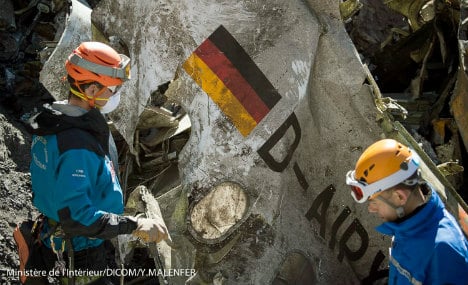 Debris from the flight 4U9525 crash seen in the Alps. Photo: French Interior Ministry/DPA

Andreas Lubitz deliberately crashed flight A320 in the French Alps in March 2015, killing himself and the 149 others on board.

Investigators subsequently found he had a history of depression and suicidal tendencies, and that Lufthansa – the parent company of Germanwings – knew about his health condition.

“As doctors, we find it appalling that both the Federal Aviation Authority and Lufthansa knew that this pilot had records of severe depression but underwent no particular checks,” he said.

“Lufthansa has failed as an employer and the Federal Aviation Authority too as a regulator. They should have required more frequent checks on such pilots,” he said.

“An annual examination – as is the general rule – is insufficient in such cases.”

Montgomery also highlighted the shortcoming of medical controls that focused largely on “physical findings and laboratory tests” but which neglected psychological examinations.

The doctor also criticised Lufthansa for scrapping a life-long “Unfit-to-fly insurance” which would have given ill pilots the security of drawing some income throughout their lifetime.

Such policies are now limited to just 10 years, he said.

“That is not fair. The working and training conditions of pilots lead to such pressure that some people develop such problems,” he said.

Relatives of victims have filed a lawsuit against the Lufthansa-owned flight school that trained Lubitz, arguing that he should never have been allowed to fly.

SEE ALSO: German airlines to up tests after Germanwings crash

PARTNER CONTENT
Living abroad: how can you assess your mental health?
Url copied to clipboard!