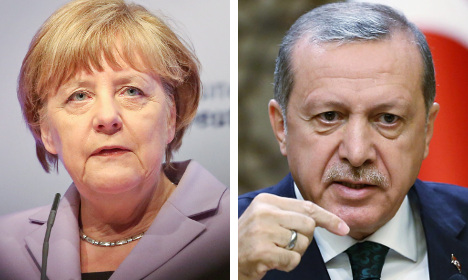 In what many observers are seeing as a power grab by Erdogan, on Friday Turkey's parliament voted behind closed doors on a bill that will strip dozens of pro-Kurdish and other lawmakers of their parliamentary immunity and drive them out of the legislature.

The law has caused outrage within the ranks of Merkel's own centre-right Christian Democratic Union (CDU), with several politicians calling for repercussions.

Lawmakers from the pro-Kurdish Peoples' Democratic Party (HDP) are particularly vulnerable to prosecution on allegations of links or even verbal support for the outlawed Kurdistan Workers Party (PKK), which is fighting a renewed insurgency against the Turkish state.

Manfred Weber, who leads both the CDU and the European People's Party (EPP) in the European Parliament, said that the EU should break off talks on allowing Turkey to become a member.

Allowing Turkey to join the European club would be a “sham”, Weber said on Thursday, given Ankara's moves against democracy, justice and press freedom.

Johannes Singhammer, deputy president of the Bundestag (German parliament) went even further, saying that the EU should abandon plans to grant visa-free travel to Turkish citizens.

Free travel into Europe was a valuable carrot offered by Merkel to Erdogan to secure a controversial deal to reduce refugee inflows earlier this year.

But the Turkish President has now “crossed the Rubicon” with his move to strip immunity from Kurdish lawmakers, conservative lawmaker Singhammer told the Süddeutsche Zeitung (SZ) on Thursday.

Bundestag president Norbert Lammert, meanwhile, warned that Turkish MPs were “disempowering themselves” by agreeing to Erdogan's demands to lift their own immunity.

By bowing to the President, the parliament would enable his “autocratic ambitions”, Lammert told the SZ.

“For the domestic stability of every democracy, it is important for every relevant group in society to be also represented in parliament. The situation will certainly be raised by the Chancellor on the sidelines of the humanitarian summit with Turkey's president,” said Steffen Seibert.

Seibert said the German government is “very concerned about the increasing political polarisation, the polarisation of the domestic political debate” in Turkey.

“We see freedom of the press and opinion playing a central role in every healthy democracy, and that applies not only to the work of the media, but also to the public expression of all citizens who wish to participate in political and societal debate, and that applies particularly also to their elected representatives,” he said.

Ties between Germany and Turkey have been strained lately by a bitter freedom of speech row sparked by German comic Jan Böhmermann's crude satirical poem about Erdogan.

The poem accused Erdogan of bestiality and paedophilia, and Ankara wants the comedian to be prosecuted under a little-applied German law against insulting foreign heads of state.

In a controversial decision earlier last month, Merkel said that she would allow prosecutors to investigate whether Böhmermann had committed a crime.

Just this week a Hamburg court took things further, ordering the satirist not to read certain parts of his poem in public.

The row has come at a particularly awkward moment as the EU desperately needs Ankara's cooperation to help curb a massive influx of migrants.