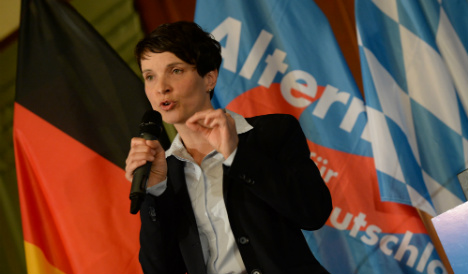 “AfD's Petry speaks in front of terrorist Nazi” was not the headline Alternative for Germany might have hoped for about their leader's appearance in the Hofbräukeller in Munich on Friday evening.

But that was exactly the way mass-market tabloid Bild reported the story that Thomas Schatt – condemned to one-and-a-half years' jail in 2005 for planning to bomb a Jewish community centre – had attended the rally.

The right-wing populists had already had to fight a legal battle against the renowned beer hall's owner after he attempted to cancel their booking, saying he feared violent counter-protests.

But over the weekend Petry and her team found themselves fighting to distance themselves from Schatt and the clutch of far-right friends who joined him at the beer hall's tables.

“People who represent such ideas don't have a political home with us,” Petry told Munich's Merkur newspaper on Monday.

“As event organizers we'd love to do without these extremists,” agreed local AfD leader for eastern Munich Wilfried Biedermann. “They give a wholly false image of the event.”

Local AfD leaders say that despite the fact that every guest had to register in advance by email and pay €18 for entry, they did not spot Schatt's name on the guestlist.

“We have no connection to any neo-Nazis,” said Petr Bystron, the chairman of AfD's Bavarian branch. “How should we know people like that?”

Bystron added that far-left activists had often been present at AfD rallies without party leaders knowing of it in advance.