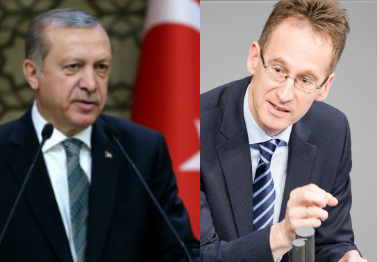 This isn’t the fare one normally expects to hear from the pulpit of the German Bundestag, where Chancellor Angela Merkel inflicts seemingly interminable speeches on helpless legislators.

But on Thursday, Detlef Seif, an unremarkable politician within the ranks of Merkel’s Christian Democratic Party (CDU), stood up and spoke these very words – and about the President of Turkey no less – leaving fellow politicians rubbing their eyes in disbelief.

The conservative lawmaker was quoting the now infamous poem written by comedian Jan Böhmermann which set off a full blown diplomatic crisis between Berlin and Ankara in April.

Politicians were debating whether to annul Paragraph 103 of the federal law book, which protects foreign heads of state from insult, and which Turkish premier Recep Tayyip Erdogan has used to try and exact revenge on Böhmermann.

But far from reading the poem as a brave act of solidarity with the comic, who now faces a possible prosecution and jail term of up to five years, Seif hoped to illustrate its lack of satirical merit, broadcaster ARD reports.

“A person's honour is under attack here and the justice must decide if these statements are still covered by freedom of expression and press,” he told parliament.

“But put yourselves in the shoes of Erdogan and think about it, how would you take it?”

Unfortunately for him, the recitation was broadcast live on television – turning it into a an immediate internet sensation – and the explicit quotes will now also have to be written into the parliamentary minutes.

House speaker Edelgard Bulmahn was less than pleased, warning Seif that he should “keep in mind that we are in the German parliament, and that even with quotations one should not forget this fact.”

Renate Künast MP for the Green Party said she found Seif’s speech “embarrassing”, while Christian Flisek of the Social Democrats (SPD) state simply, “he could have saved the poem for himself.”

All about the context?

Debate raged in Germany after Böhmermann first aired his poem, with detractors accusing him of a tasteless stunt, while supporters said that the poem should be viewed in the artistic context in which it was intended.

Böhmermann said before reading the poem he intended to show Erdogan “what real slander is” after the Turkish leader had reacted furiously to a much milder satire on a rival German late night show.

Merkel, who has allowed prosecutors to look at the case, has been strongly criticized for not standing up for artistic freedom.

Reacting on Twitter, Böhmermann joked that Seif had “read the poem after taking it out of context. Disgraceful, dishonourable and tasteless!”

In another Tweet the comic claimed “I am filing for the lifting of Detlef Seif’s parliamentary immunity due to a breach of Paragraph 103.”