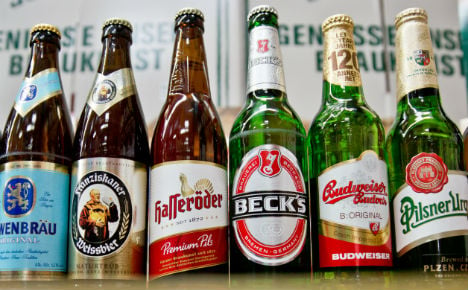 All the major supermarkets including Edeka, Metro, and Netto, were involved in the price fixing and will have to pay a combined fine of €90 million handed down by the anti-cartel agency.

Only Rewe, a more up-market supermarket chain, has escaped paying a fine because it cooperated with authorities during investigations.

Under the mounting pressures of a shrinking market for their “quality beers” and facing aggressive pricing strategies from competitors, the brewer met illegally with supermarkets to lure them into fixing their prices, the anti-cartel agency believes.

Between 2006 and 2009 several secret meetings took place behind closed doors in which Anheuser Busch offered the outlets a deal: If they would kept prices artificially high they would receive benefits including discounts and reimbursements.

The supermarkets were more than happy to play along, with some even calling on the super-brewer to try and prevent its competitors from dropping their prices.

What was taking place was “systematic price fixing’” to the disadvantage of the consumer, Andreas Mundt, head of the Federal Cartel Office has said.

The cartel which was created was so robust and effective because it was “vertical”, eventually involving several beer producers, as well as distributors.

At the same time a “horizontal” cartel was established among the brewers. In 2014, the cartel agency already rooted this illegal practice out, handing the guilty companies a €340 million fine for fixing prices among themselves.

The party is over

For years now Germans have been leaving their excessive drinking habits behind them, and this seems to have played a role in pushing the brewers into price fixing.

“There are no crates of beer any more on the building site, no more beers in automatic dispensers, and there is a zero tolerance policy for recently qualified drivers – as good as all this is, it hits the brewers,” one industry insider said.

Since 2001 the amount of beer produced in Germany has dropped markedly from 108 million hectolitres to 96 million in 2015.

Publicly, the brewers appeared to be choking back their frustration and coming to deals with the authorities on how to deal with falling profits.

But the fine handed down by the cartel office doesn't necessarily mean the supermarkets will have to pay.

Edeka, one of Germany’s largest supermarket chains, took the agency to court at the end of 2015 over a fine it was given for its discount policy. The state court in Düsseldorf annulled the decision.

And Rossmann, a major drug store with outlets nationwide, is also appealing against a multi-million-dollar fine smacked down by the anti-cartel agency over coffee prices.

So far, though, 2016 has been a year to forget for brewers, despite celebrations of 500 years of the Beer Purity Law.

In February traces of a pesticide linked to cancer was found in every German beer which scientists conducted tests upon.

Beer producers deny that the chemical traces pose a risk to consumers.