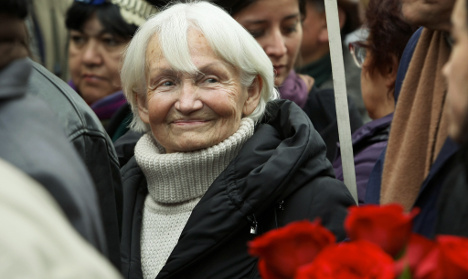 Honecker kept a low profile in Chile, where she lived with her grandson. Photo: DPA

Honecker, who had lived in Chile since 1992, died of cancer at home in the capital Santiago, media reports said.

She was a prominent member of the East German communist party and served as education minister under her husband, who ruled the country with an iron fist from 1971 until the Berlin Wall came down in 1989.

Nicknamed “The Purple Witch” for her brightly dyed hair — which she allowed to go a more natural white later in life — Honecker was a feared hardliner who overhauled the high school curriculum to include communist doctrine and military training.

The Honeckers took refuge at the Chilean embassy in Moscow after the fall of the communist regime to escape trial on charges of human rights violations and ordering the killing of fugitives fleeing to the West.

After lengthy negotiations, they were allowed to travel to Santiago because of Erich Honecker's poor health.

Honecker defended her husband's rule to the end, writing on the 10th anniversary of German reunification: “In the East, we never knew social incertitude, need and misery. Now, monster money has taken the place of human relations.

“Xenophobia and neo-fascism are developing in the East. All that is explained by the recent past. The roots of this evil are inherent in the capitalist social order,” she added in a book published in 2000, “The Other Germany.”

Honecker kept a low profile in Chile, where she lived with her grandson and socialized with a small circle of Chilean leftists who had fled into exile in East Germany during the brutal military dictatorship of Augusto Pinochet (1973-1990).

One of her last public appearances was in 2009 for commemorations to mark the 60th anniversary of the founding of East Germany, organized by a small group of former exiles.

“There is an enormous campaign against the socialist GDR (German Democratic Republic) today in Germany,” she said in a speech at the event.

“There's no television show, no film, no news program where they don't sling mud at the GDR, but to no avail… Today, many young people reflect and say, 'We must build a different society, like it was back then.'”

Honecker is survived by her daughter Sonja, who lives in Chile.