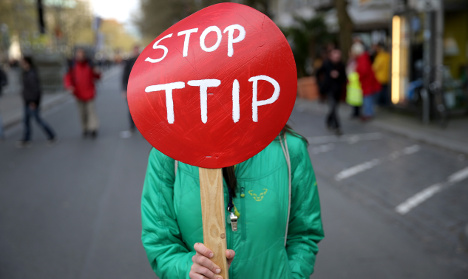 Tens of thousands of Germans have taken to the streets in protest against the pact. Photo: DPA

Some 70 percent of Germans polled by the dimap institute for broadcaster ARD said the Transatlantic Trade and Investment Partnership (TTIP) deal would bring “mostly disadvantages”, up from 55 percent in a similar poll in June 2014.

For 79 percent of those questioned, consumer rights were the biggest worry, ARD said.

Only 17 percent saw “mostly advantages” in the deal, against 31 percent just under two years ago.

The poll covered 500 people representing a cross-section of the population, ARD said.

Merkel, meanwhile, reiterated her government's official position Wednesday, saying that she would “do everything to conclude the negotiations”, preferably by the end of 2016.

But German Economy Minister Sigmar Gabriel warned last month that negotiations on the free trade deal “will fail” if the US refuses to make concessions.

“The Americans want to hold fast to their 'Buy American' idea. We can't accept that,” he said.

France has also hit out at the pact, with President Francois Hollande saying this week that Paris would reject it “at this stage” because his country opposes “unregulated free trade”.

Tens of thousands of Germans have taken to the streets in protest against the pact, including during US President Barack Obama's Germany visit last month.