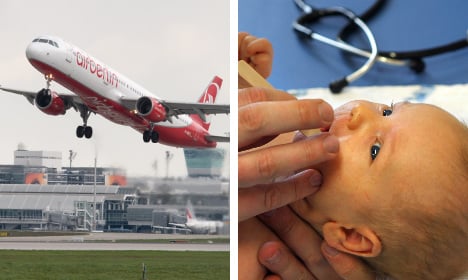 There was widespread shock last July when a cleaner found the baby inside a toilet bowl in a car park at Germany's second-busiest airport.

Luckily for the child, an emergency doctor and a medic were nearby at the time and were able to resuscitate her before she was taken to hospital in Munich.

While still at the airport, the infant was given the name Franziska by the medical team.

But once at the hospital, doctors had to battle for her life, as she had suffered severe hypothermia while submerged in the toilet water.

The baby girl came through her ordeal after being placed in an artificial coma and now lives with a foster family.

Meanwhile, after a fruitless search of the terminal, police were able to identify the mother a week after the find based on eyewitness testimony and a DNA test.

Now the woman faces a charge of attempted voluntary manslaughter in a trial set to last five days before the state court in Landshut, the Süddeutsche Zeitung reported on Tuesday. If convicted, she faces between five and ten years in jail.

The mother of the baby had apparently been hired by a man to accompany his rare cat on a flight from Dubai to Munich, and evidence from the man proved decisive in identifying her.

He told police how she had been pregnant when she picked up the cat and seemed extremely tense when they met.

It now appears that her contractions had already begun before she boarded the plane home for the more than six-hour flight.

The young woman denied completely that she was the mother of the child when she was arrested at her home in Heidenheim a week after the child was found.

When she was held for questioning by police, she refused to say anything further.

But a DNA test showed there was no doubt that she was the mother. There is so far no information about the father of the baby.

Meanwhile, the parents of the 23-year-old say that they knew nothing about their daughter's pregnancy – although her mother was standing right outside the toilet as the young woman was giving birth.

The family reportedly drove home to Heidenheim immediately after the birth as though nothing had happened.