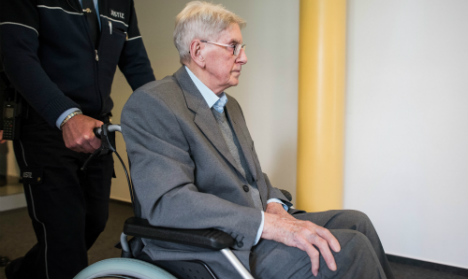 The accused being brought into court in a wheelchair on Friday. Photo: DPA

“I have been silent all my life,” Reinhold Hanning told a court in the western town of Detmold, more than 70 years after the end of World War II.

“I want to tell you that I deeply regret having listened to a criminal organisation that is responsible for the deaths of many innocent people, for the destruction of countless families, for the misery, distress and suffering on the part of victims and their relatives,” according to remarks carried by national news agency DPA.

“I am ashamed that I let this injustice happen and have done nothing to prevent it.

“I apologise formally for my behaviour. I am truly sorry,” said the white-haired, bespectacled widower, who owned a dairy store after the war.

Hanning stands accused of having watched over the selection of which prisoners were fit for labour, and which should be sent to gas chambers.

At the opening of his trial in February, one of the witnesses, Leon Schwarzbaum, 90, made a plea for him to tell the truth.

“We are almost the same age. We'll both face our highest judge soon,” he told the defendant, urging him to explain the atrocities at the death camp in occupied Poland.

Note: This article has been corrected to reflect the true age of Reinhold Hanning, which is 94. The Local regrets the error.