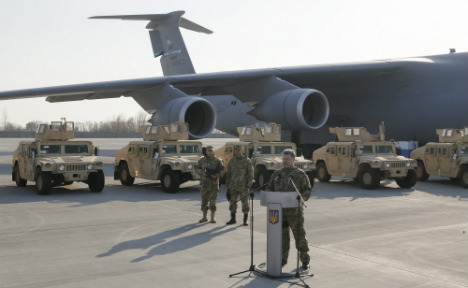 The practice drop took place in Hohenfels, Bavaria, on April 11th, where the U.S. Army’s 173rd Airborne Brigade were taking part in a routine training mission.

Stars and Stripes, the official U.S. military news site, reports that the first drop went according to plan, with all Humvees – four-wheel drive trucks worth up to €200,000 each – floating gently down to the ground.

But a video uploaded on Thursday onto YouTube shows how it all went quickly downhill, and became extremely costly, from there on in.

When the next plane passed and made its drop, one of the huge vehicles disconnected from its parachute and crashed to the ground, sending a thick ring of white dust into the air.

Seconds later, another plane passed overhead. Again, most of the cargo floated gently down to earth – except one load. Once again a Humvee spiraled to the ground and landed in the field with an almighty whack.

Moments later the chaotic scene, repeated itself a third time.

According to Die Welt three parachutes 30 metres wide were supposed to accompany the armoured vehicles to the ground.

A US Army spokesperson said that nobody was injured in the mishaps.

“Everything is planned for safety purposes; everything is done according to Army regulations and policies to ensure the safety of personnel and equipment,” Major Juan Martinez told Stars and Stripes.

“However, things do happen, and that’s why investigations come up to identify what went wrong, what happened so we can learn from here and continue so when we do real operations, these things don’t happen,” he added.

As for the vehicles, though, it doesn't seem like there's much chance of them going back on deployment any time soon.

Somebody's got a lot of explaining to do! https://t.co/5t5OvKdNeA pic.twitter.com/Fs2JK6dZBB