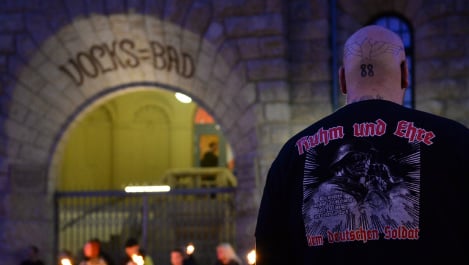 A Thügida marcher with a skull tattoo of a Nazi-style eagle and the number 88 (code for 'HH' - Heil Hitler). His shirt reads "glory and honour to the German soldier". Photo: DPA

The march had been called by Thügida, a Thuringian offshoot of Dresden-based anti-Islam movement Pegida.

Police reported that 15 officers were hurt while trying to calm the violence as around 3,000 counter-demonstrators sought to break through their lines to reach the roughly 200 right-wingers.

Several hundred officers used pepper spray to control the crowd and took down at least 35 crime reports related to demonstrators from both sides.

There were no figures available on the number of demonstrators hurt by late on Wednesday evening.

Counter-protesters threw rocks and bottles at the far-right demonstration, damaging several vehicles including three belonging to the police.

Video posted by a freelance journalist on the scene showed a large crowd of demonstrators booing the far-right marchers under the protection of large numbers of police officers and a water cannon.

Marchers appear carrying torches and the black, white and red colours of the former German Empire.

Attempts by the city to block the demonstration or to move it to the following day – so as to avoid the Hitler anniversary – failed in state courts.