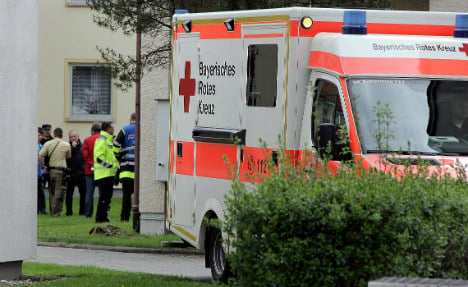 An ambulance at the flat in Rosenheim. Photo: DPA.

Authorities had turned up to forcibly evict a 54-year-old tenant of an apartment in Rosenheim, Bavaria, police said in a statement on Tuesday.

But when they arrived, the woman threw herself from the second floor of the building down the stairwell in an apparent suicide attempt.

She was seriously injured in the process and had to be taken to hospital.

Police were brought in to inspect the house and found it in a state of complete neglect and squalor.

Officers then discovered that one room had been locked up, so they forcibly entered it. There they encountered a 26-year-old woman, who they believe to be the tenant’s daughter.

“The circumstances of her discovery cause us to suspect that the daughter was in this room over a long period of time, possibly for years,” the police report states.

The young woman, who is reportedly also mentally disabled, was brought to a psychiatric clinic.

Criminal investigation teams have taken over the case and are evaluating whether this could be a case of forced imprisonment.

Police explained that currently, neither of the women are in a position to be questioned.