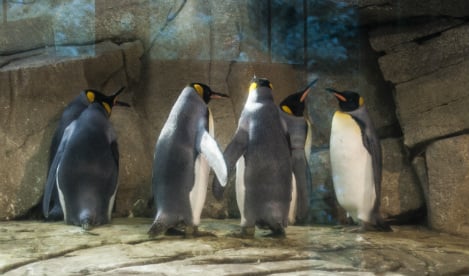 “They're gay, as far as we know,” said Berlin Zoo spokeswoman Christiane Reiss of penguins Stan and Olli.

“They never bred. And when it came to courtship, they only mated with one another.”

Stan and Olli were brought to Berlin under the European Conservation Programme (EEP) in a bid to bring more baby king penguins into the world and ensure the future of the species. Stan (left) and Olli (right) pictured in their enclosure in Hamburg on Tuesday. Photo: DPA

But now they're acclimatizing to their new life in Hamburg where they'll be exclusively in the company of other males – including another homosexual couple, Juan and Carlos – and free to be themselves.

Even their names have changed since the move to the northerly port city.

Penguins, it seems, have been at the forefront of the fight for gay rights in Germany, where same-sex marriage is not legal and gay couples have very limited adoption rights.

Two gay penguins at Bremerhaven Zoo pushed boundaries, however, when in 2009 they “adopted” an egg that had been cast aside by a heterosexual pair, working together to hatch the baby.