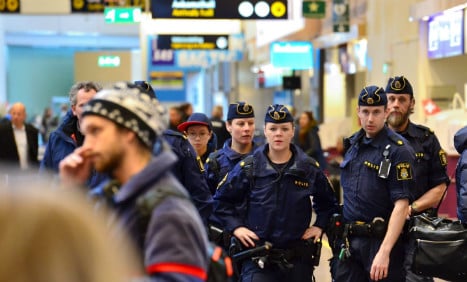 The man, who was on an international arrest warrant list, had just been about to board a plane to Turkey when he was arrested by Swedish police at around 8.30am, Sweden's Aftonbladet tabloid reported.

His nationality has not been confirmed, but prosecutor Ronnie Jacobsson told Expressen he is suspected of terror offences.

It is understood he is born in 1980 and has been on German police's radar for at least a year.

“What has been stated to the court is that it's about terrorism crimes in Germany. I cannot say whether or not he is a German citizen,” said Jacobsson, adding that the suspect was being questioned by Swedish security police Säpo.

A press spokesman for the security services confirmed to The Local that it was aware of the man's arrest, but would not disclose any further information.

He is believed to have been travelling through Sweden when he was stopped at the airport.

“He landed at Arlanda. There is no other connection to Sweden at all,” said Jacobsson.

Get the latest on this story at The Local Sweden.