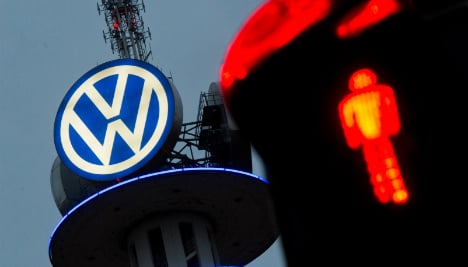 According to the German news agency DPA on Tuesday, managers could be willing to accept a reduction in their bonuses.

A corresponding proposal had been put forward and would be discussed later on Tuesday or on Wednesday, DPA reported, quoting executive board sources.

But the fact that they appear unwilling to forego the payments altogether – which make up the lion's share of their annual salary – has sparked anger and moral outrage across the country.

“Volkswagen is a frightening example of how far the executive class has distanced itself from the rest of society and even their shareholders,” wrote the daily Frankfurter Allgemeine Zeitung in an editorial.

“How far away from reality can a top executive be?” the newspaper asked, questioning whether VW's new chief executive Matthias Müller – brought in to solve the group's deepest-ever crisis – really was “the right man for the job.”

VW, which is scheduled to publish its annual results on April and could post a loss running into many billions of euros, could also announce a waiver in the dividend payout to shareholders for the first time since the early 1980s.

The issue is also causing ripples in political circles.

Herbert Behrens, head of the regional branch of the far-left Die Linke party in Lower Saxony, where VW is based, described the idea of paying performance-related bonuses to managers given the still incalculable costs of scandal as “a slap in the face” for VW workers concerned about their livelihoods.

Even Finance Minister Wolfgang Schäuble appeared unable to hold his tongue, snapping late Monday that “there are discussions where it is hard to believe that the people concerned fail to comprehend that this is not compatible with certain values.”

At the centre of the controversy is the question whether VW executives are entitled to the performance-related bonuses for 2015.

After all, CEO Müller had been quick to prescribe belt-tightening to the carmaker's 600,000-strong workforce in the wake of the global scandal that erupted six months ago when it emerged that VW had installed emissions-cheating software into 11 million diesel engines worldwide.

A number of supervisory board members wanted the top executives to forego their generous bonuses altogether as an example to the workforce.

But press reports have suggested that Müller is merely pushing for a reduction of around 30 percent.

Müller's predecessor, Martin Winterkorn, who quit as soon as the scandal broke last September, was the highest-paid executive in Germany for a number of years, earning around €15 million.

The other board members pocketed bonuses of between four and seven million euros in the same year.

In theory, the executives should also be entitled to a bonus for 2015, as well, as the payment is calculated on the basis of the carmaker's performance in the preceding years.

In the current context, however, the expectation is that they will forego the payments and the regional government in Lower Saxony, a key shareholder, said there was “increased awareness about the problem” of performance-related bonuses.

VW itself has refused to comment so far, simply pointing out that board pay would be published in VW's annual report on April 28.

“The management board is determined to set an example when it comes to the adjustment in the bonuses,” a spokesman said.

According to the weekly magazine Der Spiegel, the former finance chief Hans-Dieter Pötsch, who was appointed to the head of the supervisory board in October, pocketed nearly €10 million as “compensation” for the lower pay he would receive as a result of the switch.

Unions are concerned that the belt-tightening needed to cope with the fallout from the so-called “dieselgate” could lead to job cuts.

“We have the impression that the diesel engine scandal could be used as a backdoor for job cuts that weren't up for discussion until a couple of months ago,” the works council wrote in a letter to the management of VW's own brand and published on the website of the powerful IG Metall labour union.