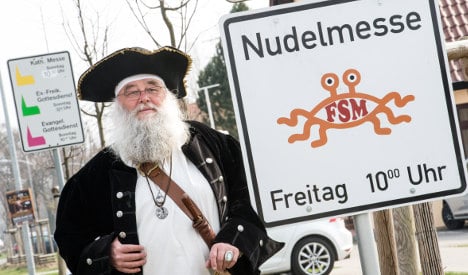 Rüdiger Weida, aka Brother Spaghettus, with one of the signs he wants to protect in Templin, Brandenburg. Photo: DPA.

The Church of the Flying Spaghetti Monster (FSM) in Templin has filed charges against the state of Brandenburg over being able to post signs around town, with the first hearing set for Wednesday, according to the group.

The FSM church explained in a statement that in December, it had discussed with local authorities its status and agreed it could qualify as an “ideological community”. They therefore had the right to post signs advertising their “noodle mass” – just as Protestant and Catholic churches advertise their own masses and gatherings with roadside signs.

Then, Brandenburg Culture Minister Sabine Kunst declared that because the spaghetti monster followers were not officially designated as a religious community, they would therefore have to remove the signs.

Worshippers saw no recourse but to bring the case to court.

“No matter what happens, the opposition has shot themselves in the foot,” Brother Spaghettus, also known as Rüdiger Weida, told Jetzt, because either they will allow the signs to be set up again, “or we will take it to the next level court.”

The Church of the Flying Spaghetti Monster was established in the United States in 2005 as a satirical way to protest fundamentalist Christians pushing for the intelligent design theory to be taught in schools.

Equal time should be devoted to the idea that science alone could not explain the emergence of life as to the theory of evolution, the religious groups demanded.

FSM founder, Bobby Henderson, called for his beliefs to also be awarded equal time in the classroom if the Christians' demands were accepted.

Since then, the church's “Pastafarian” followers have spread throughout the world, gathering at noodle masses to eat spaghetti and drink beer.

Pastafarians often wear colanders on their head, believe that humans descended from pirates (“the original Pastafarians”) and that in the afterlife they can look forward to a heaven complete with a “beer volcano and stripper factory”.
“Elements of our religion are sometimes described as satire and there are many members who do not literally believe our scripture, but this isn’t unusual in religion. A lot of Christians don’t believe the Bible is literally true – but that doesn’t mean they aren’t True Christians,” the FSM website states.
“We are not some kind of mindless, nonsense troupe that many people think we are,” Brother Spaghettus told Jetzt.
“We remain confident in the right to our claim and are prepared to achieve it through all legal means,” Brother Spaghettus wrote in a statement.
An FSM sign advertising “noodle mass” in Templin underneath Catholic and Protestant notices about their own masses. Photo: DPA.